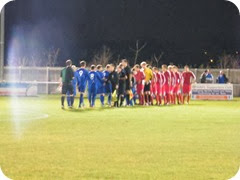 Penrith Stormed straight into this match against Newton Aycliffe and really should have taken all 3 points, the decision to send off Curtis Wood just before half time made the game more even. Penrith Started the game the brighter when after 4 Minutes Reed’s shot from 30 Yards was just wide shortly later Penrith’s Gardner got to the by-line the cut back towards Errington but it was cleared for a corner, the resulting corner was cleared but it was sent back in only for Errington to head straight into the keeper arms. On 15 minutes a long ball over the top by Davidson sent Errington clear but his shot was saved well by the keeper. On 18 Minutes Penrith took the lead when another long ball over the top should have been caught by the Aycliffe keeper but he completely missed it only for it to fall directly to FASTINO Who was left with a simple tap in to an empty net (0-1). Newton Aycliffe’s first chance came on 19 minutes when a free kick was sent over the bar. The Newton Aycliffe keeper was looking well suspect when on 21 minutes he failed to hold Rigg’s shot from 25 yards but he just managed to recover enough to hold it before Penrith’s Gardner could get to it. On 30 Minutes Penrith’s Jackson had an overlapping run from a pass from Fastino but his shot was well wide. Wood’s cross on 34 Minutes was headed straight towards the Aycliffe keeper by Gardner but was saved easy enough. The game changer came on 39 Minutes when a long ball over the top sent Tom Atkinson clear but Penrith’s Curtis Wood tackled him from behind just inside the area bringing him down and getting the ball but the ref deemed it a penalty before sending Wood off for denying a goal scoring opportunity, Harsh on Penrith who had dominated the game up till that point. Stuart OWEN Converting the Penalty (1-1)
H/T 1-1
Straight from the KO Penrith went for it and were rewarded on 47 Minutes when RIGG’S shot from the edge of the area found the bottom Corner to make it 1-2 to Penrith . On 53 Minutes Gardner’s back heal found Fastino who shot was wide. On 59 Minutes a long ball over the top found Kerry Hedley who got free on the left and ran on in on goal to fire pass the Penrith Keeper to make it 2-2. Shortly after that Errington had a solo run past 3 Aycliffe players but his shot was wide. On 75 Minutes Aycliffe took the lead when a Cross from the left by Clough found Tom Atkinson who tapped passed the keeper to make it 3-2. 3 Minutes later on 78 Minutes Penrith got a corner and from the Corner Davidson headed Penrith back level at 3-3. On 81 Minutes a cross from Fastino found Gardner who header hit the post. On 85 Minutes a cross from Gardner found Rigg he took the cross down but was unable to get any power on the shot and it was easily saved, the final chance came for Newton Aycliffe shortly after that when they received a corner and S. Gibson had a free header from the corner but he headed over.
F/T 3-3
Penrith will be disappointed with the sending off and should have come away with more than the point they got a game that they still dominated even with 10 men. 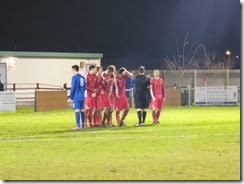 Newton Aycliffe F.C. is an English football club based in Newton Aycliffe, County Durham. The club's ground is the Moore Lane Sports Club Ground. They play in the Northern League Division One. Aycliffe, originally formed in 1965, spent a number of years in the Wearside League The club left that league during the 1993–94 season.[1] The club reformed and played in local football before joining the Durham Alliance. The most crucial part of the club’s bid to re-join the Wearside was the club’s redevelopment of Moore Lane Park – thanks to a £300,000 grant from Sedgefield Council’s Local Improvement Programme and a further £20,000 from the Football Foundation – which afforded the club the facilities, including floodlights, to make the step up.They won that league in 2007–08 and joined the Wearside League. The club was elected into the Northern League for the 2009–10 season, after finishing first in their previous season in the Wearside Football League. Finishing in ninth place in their first season in the second division of the Northern League, they went on to become the Champions of the division with three games remaining. Having anticipated the possibility months before, the team were required to make more improvements to the home ground to be eligible to play in the First Division of the Northern League. Upon ensuring their place in the top division, they finished in ninth place and participated in the FA Cup for the first time.
HONOURS2010-11: Northern League Division Two Champions
2008-09: Wearside League Champions
2007-08: Durham Alliance League Champions, League Challenge Cup Winners, Clem Smith Bowl Winners, Washington Aged Miners Cup Winners, South Durham Bowl Winners
2004-05: Darlington District League Division A Winners, Darlington Charity Cup Winners, Durham FA Minor Cup Winners, Kingfisher Finance Cup Winners
2000-01: Darlington District League Division A Winners, League Cup Winners
1999-2000: League Invitation Cup Winners
1998-99: Kingfisher Finance Cup Winners