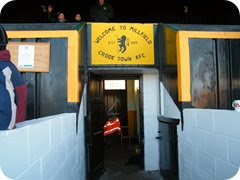 Crook Town Association Football Club is an English football club based in Crook, County Durham. The club are currently members of Division One of the Northern League and play at the Sir Tom Cowie Millfield.Crook Town Football Club was formed in 1889 by a merger of Crook and Crook Excelsior The club won the FA Amateur Cup five times. In 1913 Crook made the first of three tours to Spain where games were played against Barcelona. Subsequent tours were undertaken in 1921 and 1922. In all Crook played Barcelona ten times, winning two, drawing four and losing four. Jack Greenwell, a native of Crook who played on the first tour stayed on to play for Barcelona. Jack went on to manage Barcelona and the Spanish national team before coaching all over the world during the 1930s. In 2012-13 then were promoted to the Northern League Division 1 after Winning Division 2 The Record Attendance was 17,500 for the Amateur cup game in 1952 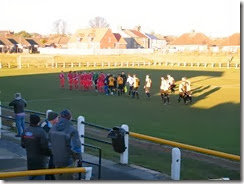 Have been a bit busy with other stuff this month so this report is late hence the short blog.This was a Northern League game between Crook and Penrith. I made my way to Penrith where we were given a lift to Crook. We parked up on the grass verge outside the ground and paid the £6 entry fee

Crook Town lost 2-1 at home to Penrith. The visitors took the lead with a shot by Ryan Hall that beat Crook’s debutant keeper Jack Norton, who stopped a second with an excellent save. Crook levelled when Robbie Bird was fouled, and Richard Hodgson scored from the penalty spot. However, Penrith won the points when Hall blasted in a free kick past Norton on 57 minutes. A game that was end to end stuff but the pitch was mighty sodden to be honest the game could have gone either way. 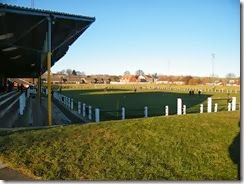 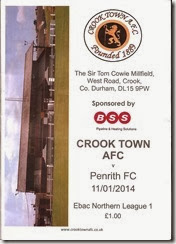