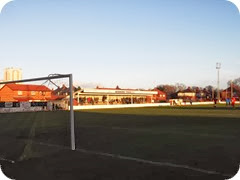 Hebburn is an English Football club based in Hebburn. Most people will know Hebburn from the BBC Comedy TV Series Hebburn Created by Jason Cook. They are in the Northern League Division one after Promotion in 2011-12.They Originally started life as Reyrolles FC in 1912 but in 1986 changed there name to Hebburn Reyrolles then in 1988 Became Hebburn. In 1989 they Joined the Northern League. The Ground holds Approx 1500 and they are Nicknamed the Hornets. 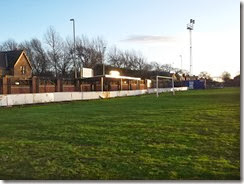 Making our way over from Carlisle we again spent time at the Soft play centre Giants Den at the Team Valley Ind Estate, before making our way to Hebburn arriving just in time for Kick off. We parked at the top end of the ground next to the 5 a side courts. The ground is small and has other pitches than run along side of it The main stand is a small standing terrace there is a little terrace behind one goal and the other side is open. The other side has another football pitch running along side it. There isn’t much to the ground other than the Social Club which has viewing windows so you can watch the game from up in the warmth of the bar if you wish. The Excellent food counter charges 50p for everything Pies/Burgers or Hot Dogs. 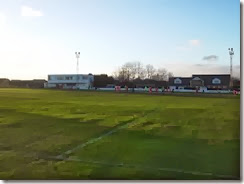 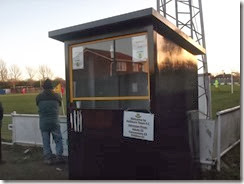 Miles from Carlisle 64 Miles Each way 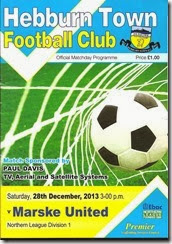