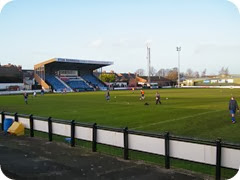 Stafford Rangers Football Club is a semi-professional English football team from Stafford which plays in the Northern Premier League Premier Division. Despite extensive research, no one has ever been able to prove conclusively when Stafford Rangers was actually formed, as early minute books were destroyed during the First World War. Rangers' formation year is recognised as 1876 because of articles in the local Advertiser newspaper, but an alternative theory on Rangers' formation date, printed in the Sentinel newspaper during 1891, suggests that the club was founded by a Bible class in 1877. Stafford Rangers have played at Marston Road for over 110 years. The first competitive game at the ground was on Saturday 5 September 1896 it has 4 side with a 530 seat main stand with the blue seats being rescued from Leicester’s old filbert street ground. Because of the land-locked nature of Marston Road, it is widely accepted that for the club to progress then they must move away from their home of over 100 years. At present there are no official plans to do this and the club are instead upgrading the ground to meet league requirements.

Stafford's miserable season continued with another home defeat to mid table Whitby Town. Whitby had early opportunities for Lee Mason and Steven Snaith before taking the lead in the 17th minute. A corner from Mason hung in the wind and was headed home by Richard Pell at the far post.  Graham Armstrong should have scored a second for the visitors when he wrestled Darren Chadwick off the ball but he missed the target. Whitby scored a second two minutes after the break. Jon Brain pulled off a fine save to thwart Armstrong but Shane Henry was on hand to slot home the rebound. Rangers did push for a goal, Chadwick forcing a fine save from Shane Bland with a point blank header. Whitby should have added to their tally but Brain made a fine save to thwart Dave McTiernan. Bland made a fine save late on to thwart Jack Lees but Rangers yet again failed to trouble the scorers. (Match report Courtesy of www.staffordshirenewsletter.co.uk ) 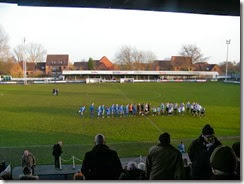 Craig Farrell started his Career at Middlesbrough but Joined the Leeds United Set up at 15 signing a 4 year deal. In Oct 2002 he joined Carlisle on Loan for 1 month but a month Later this was converted into a permanent deal on a 3 Year contract he was released in May 2005 after scoring 20 goals in 81 Appearance's. He then spent a season at Exeter before joining York Whilst at York he played 91 games scoring 21 goals and having a 15 game loan spell at Oxford scoring twice. From there he went to Rushden and Diamonds AFC Telford,Hinckley, Blyth Spartans before joining Whitby on Nov 2012. He has also played for England U16 Scoring once

Adam Rundle Started his Career at Newcastle but was released without being offered a contract he signed for Darlington in 2001. On Jan 2003 Carlisle paid £40,000 for his services playing 44 games scoring 3 goals. In 2004 he followed manager Roddy Collins to Dublin City but in Jan 2005 Carlton palmer brought him to Mansfield Town. From there he went to Rochdale playing 132 times. In Feb 2010 his contract was terminated by MC and he signed for Chesterfield on a short term deal. For the 2010-11 season he played for Morecambe although he had a loan spell at Gateshead. At the end of the season he was released and joined Darlington for the 11/12 Season where his contract was terminated by the administrators on Jan 16th due to the financial difficulties engulfing the club but decided to remain until the end of the season on non contract terms. for the start of the 2012-13 season he played for West Auckland Town but left to Join Cork City in Ireland in Jan 2013 In July 13 he left to sign for Whitby 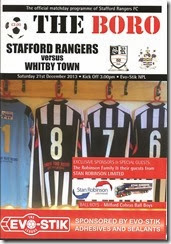