St. Mirren Football Club is a Scottish professional football club based in Paisley,Renfrewshire, founded in 1877. The team plays in the Scottish Premiership, having been promoted from the First Division in 2005–06. The team has two nicknames, the "Buddies" and the "Saints". St. Mirren have won the Scottish Cup three times – 1926, 1959 and 1987 – the League Cup in 2013 ( A game I Attended) The club's home ground is St. Mirren Park, which since 2009 refers to the clubs 8,023 all seater ground on Greenhill Road, Paisley. Between 1894 to 2009, St. Mirren Park was the name given to the club's well known former Love Street stadium. St. Mirren was formed as a gentlemen's club which included, among other sports, cricket and rugby in the second half of the 19th century. The increasing popularity of football ensured that by 1877 the members had decided to play association football and 1877 is the football club's official foundation date. They are named after Saint Mirin, the founder of a church at the site of Paisley Abbey and Patron Saint of Paisley. There is also a street in Paisley named St. Mirren Street.

St. Mirren played at four different venues before moving to their ground of St. Mirren Park, or Love Street, in 1894. In the 1950s the club had a unique problem when it came to installing floodlights at Love Street. The ground was on the direct approach path for aircraft to the local airport which, at that time, was a mere three miles east, in Renfrew. This meant that as well involving Paisley Town Council, Saints’ plans also had to satisfy three Government departments - the Ministry of Civil Aviation, the Air Ministry and The Admiralty. 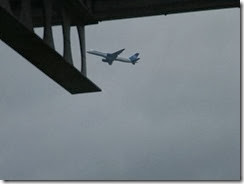 In 1966 the airport was moved to less than a mile north of St Mirren Park and its current site in Abbotsinch, Paisley; later becoming known as Glasgow International Airport. Almost immediately the club was being asked by the media when they would install "proper" floodlights, as the system was not highly regarded. Club finances at the time were extremely tight, with only two full-time employees, and so there was no possibility that money could be spent on improving the floodlights. It took until 1978, with a new set of Directors at the helm and a Development Fund put in motion that 90-foot high pylons were erected.

On 16 August 2005 the Scottish Executive and Renfrewshire Council granted permission for the club to sell Love Street for supermarket development and allow the club to build a new stadium in Greenhill Road, Ferguslie Park, Paisley. The sale of their old ground financed the new stadium and cleared the financial debts of the club. The last match to be played at Love Street, a goalless draw between St. Mirren and Motherwell, took place before a sell-out crowd on 3 January 2009. The club officially moved into the new St. Mirren Park on Wednesday 21 January 2009. The local authorities subsequently refused planning permission for a supermarket on the Love Street site. The Stadium has four stands with a total capacity of 8,023. The North Stand is used by away fans but for larger away supports part of the West Stand can also be given to away fans. 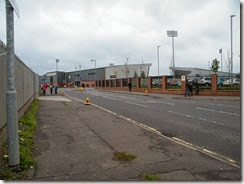 Paisley St James railway station, which is served by trains on the Inverclyde Line from Glasgow Central, is adjacent to St. Mirren Park. (above is the View from the Station Entrance)

This game played on Sunday 17th November after the original game was PP, St Mirren were leading 2-0 a fortnight ago when the game was abandoned in the second half because of a waterlogged pitch.

The first chance for came for the visitors when they had a penalty appeal turned down when Kevin Luckassen appeared to fall over in the box after a slight tug from Conor Newton probably not enough for warden a penalty. St Mirrens first chance came, when Conor Newton sent Jason Naismith away down the right and the young defender’s cross was met by Steven Thompson who’s shot went just wide. St Mirren took the lead on 35 Minutes after McGowan had linked up with Sean Kelly, before finding McLean at the edge of the box. The Scotland U21 midfielder drilled a right-footed shot low past County keeper Mark Brown, Although it took a deflection off Steven Thomson, who then nearly made it 2-0 before the break when his volley was inches wide from a corner. 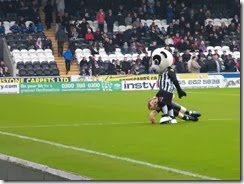 In the Second half Thomson was given too much time in the box, and he layed the ball to Newton for the on loan Newcastle Man who fired beyond the goalkeeper. The visitors got themselves back into the game when the defence failed to clear a Graham Carey corner, and Steven Saunders was able to flick it up before an overhead kick into the back of the net a brilliant finish.County’s hopes of a comeback were over when they were reduced to 9 men. Ivan Sproule was given his marching orders after a high tackle on McAusland. Then goal scorer Saunders turned villain as he was sent off for a second yellow card a wreck less challenge just 3 minutes after his 1st card. Then on 75 mins Mcgowen fed Kelly who’s shot was saved by the Ross County Keeper Brown. Thompson again layed the ball to the impressive Newton who’s shot was just tipped wide by Brown with ten minutes to go. St Mirren were able to comfortably see the match out, although in the last minute Goodwin seamed to have handled the ball in the area and Ross County thought they had a last gasp chance with a penalty but the ref waved away the protests and the game finished 2-1.

To be honest it probably was a penalty at the end but Ross County didn’t deserve anything out of the game and had they scored and drew 2-2 it would have been harsh on St Mirren who were rather impressive, but lacked the clinical touch . The full backs Naismith and Kelly were really impressive getting forward at every opportunity. Mcgin and Newton in the Centre of the park dominated the game. with the experienced Thompson leading the line well. 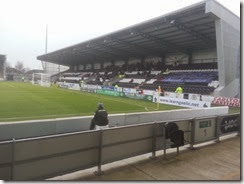 I choose this game because I had won some extra cash on my Coupon Fri and Sat so decided to re-visit the ground, mainly due to the excellent Rail link and Cheap ticket for this game. Another enjoyable game despite the cold weather, my first visit on the 22nd October 2011 had finished 3-2 to Hibs in what was another entertaining game. I had caught the 12:50 from Carlisle arriving into Glasgow Central at 14:00 then catching the 14:20 to Paisley St James Arriving at 14:37. After the game I had caught the 16:55 back to Glasgow Central then boarding the 17:36 back to Carlisle back in Carlisle by 18:50,Its and easy day out at St Mirren the rail connection’s are excellent from Carlisle. 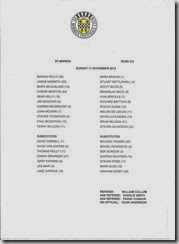