East Stirlingshire Football Club is a Scottish association football club based in the town of Falkirk. The club was founded in 1881 and competes in the Scottish League Two as a member of the Scottish Professional Football League. The club's origins can be traced to 1880 when a local cricket club formed a football team under the name Britannia, based in the village of Bainsford. The club was elected to the Scottish Football League in 1900–01 and has competed in the league system for most of its existence. East Stirlingshire has won the second tier of Scottish football once and finished runners-up once, earning promotion to the top-flight on both occasions. The club's highest league ranking came during the two solitary seasons it competed in the top flight in 1932–33 and 1963–64. League restructuring for the 2013–14 season saw the creation of the Scottish League Two, which the club competes in and have done since 1982 when they were relegated. The club sold many young players to larger clubs, including defender Eddie McCreadie to Chelsea in 1962 who earned 23 international caps for Scotland and is tenth in Chelsea's all-time appearance list with 410. East Stirlingshire was controversially merged with Clydebank Juniors in 1964. The new club was renamed East Stirlingshire Clydebank – often E.S. Clydebank for short – and relocated to Kilbowie Park in Clydebank against fans' wishes.However, the merge lasted only one season, with East Stirlingshire shareholders winning several court cases against it and thus the club reverted to its original legal status and moved back to Falkirk.

In June 1974, Alex Ferguson was appointed manager of East Stirlingshire, at the comparatively young age of 32. It was a part-time job that paid £40 per week He gained a reputation as a disciplinarian, with club forward Bobby McCulley later saying he had "never been afraid of anyone before but Ferguson was a frightening bastard from the start.The following October, Ferguson was invited to manage St. Mirren. While they were below East Stirlingshire in the league, they were a bigger club and although Ferguson felt a degree of loyalty towards East Stirlingshire, he decided to join St. Mirren after taking advice from Jock Stein. No manager has won a league title with the club, however, Billy Lamont managed East Stirlingshire to promotion to the1980–81 Scottish First Division after finishing runners-up in Division Two

At the start of the 21st century the club struggled financially, paying players £10-a-week and manager Dennis Newall became the first unpaid manager at senior level in Scottish football. As a result, the club ranked last in the Scottish Football League for five consecutive seasons from 2002–03 to 2006–07, losing 24 consecutive league games in the 2003–04 season, recording only 8 points from two wins and two draws in 36 games. From the 2005–06 season, it was determined if a club finished bottom of the Third Division twice in successive years, it would face the risk of being reduced to associate member status, meaning the loss of voting rights. In East Stirlingshire's case, a league vote was held and concluded in favour of the club retaining full member status with the condition that it did not finish last the following season in 2008. The club won its final game of the season to move off the bottom of the table in a 3–1 win against Montrose, which was also the last game at Firs Park.The following season, retaining full member status, the club moved to Ochilview Park in a ground-share agreement with neighbours Stenhousemuir and have been there every since. 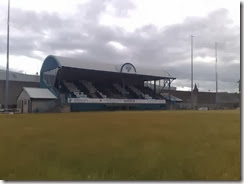 Firs Park was located to the south of the canal in the centre of Falkirk, named after the street in which it was situated, Firs Street. The club moved to the ground in 1921 and in the same year, the club's record attendance was set at a Scottish Cup match against Partick Thistle when 12,000 spectators attended. Firs Park was East Stirlingshire's home for 87 years, except a solitary season in 1964 when the club played at Kilbowie Park in Clydebank after being controversially merged with Clydebank Juniors. As a result of the merger, Firs Park was closed, however, after only one season, the merger was disbanded and East Stirlingshire moved back to the ground, where it remained until the end of the 2007–08 season. The decision was taken by the club to close Firs Park due to the prohibitive costs of potential refurbishing to meet new Scottish Football Association stadium criteria. At the time of closure, the ground had a capacity of 1,800 with 200 seated in the main stand I visited Firs Park in July 2010 when Carlisle were playing Falkirk and was lucky enough to be able to get inside the ground Photo’s can be seen here Link. The ground has now been demolished although the surrounding wall still stands 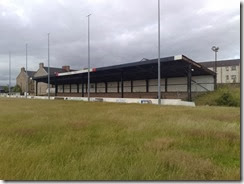 So technically this wasn’t a new ground for me but never the less if I wanted to visit the 42 Scottish clubs then I had to see both Stenhousemuir and East Stirlingshire play at Ochilview Park. So the Sunday Cup fixture gave me the Ideal Opportunity to visit. November was always going to be busy for me and this was to be the start of a busy month After Leaving Carlisle for 1230 we were comfortably into Falkirk for 2.30 this time we drove parking up on the waste land behind the stadium. This was a Scottish Cup 3rd round fixture between Raith Rovers and East Stirlingshire. This time we decided to go into the away end after being in the home end last time out. 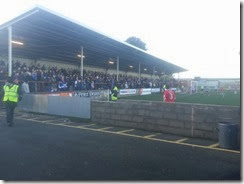 Raith Rovers advanced to the Scottish Cup fourth The Championship side created several decent first-half chances, the best of which fell to Paul Watson, who brought a good save out of Grant Hay. East Stirlingshire's resistance ended in the 48th minute when Gordon Smith converted Callum Booth's pass. With 10 minutes remaining, Michael McGowan put through his own net to end any hopes of a comeback. 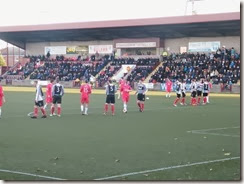 The game wasn’t the best but the Raith Following was loud and created a good atmosphere. after the game were back down into Cumbria for 7pm. Just the 4 Highland clubs now remain for me to complete the 42 Ross County, Inverness, Peterhead and Elgin

Miles from Carlisle 107 Each way