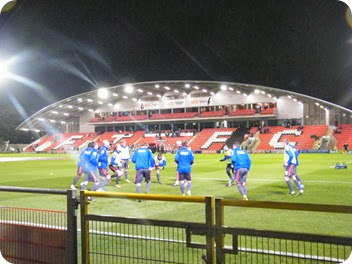 Fleetwood Town Football Club is an English football club based in Fleetwood, Lancashire, and participates in League Two, the fourth tier of English football. Established in 1997, the current Fleetwood Town F.C. is the third incarnation of the club which first formed in 1908. Their home strip is red shirts with white sleeves and white shorts. The home ground is Highbury Stadium in Fleetwood. The club won the 2011–12 Football Conference, and played in the Football League for the first time in the 2012–13 season.

The current club was officially established in 1997 but, in two previous incarnations, the club's history dates back to 1908. The original club, Fleetwood F.C., were champions of the Lancashire Combination in 1923–24, and registered a hat-trick of Lancashire Combination Cup wins in 1932, 1933 and 1934. and folded in 1976 because of financial difficulties. The club was re-established in 1977 as Fleetwood Town F.C., with many of the original personnel. They reached the final of the FA Vase in 1985, losing 3–1 to Halesowen Town in front of a 16,000 crowd at Wembley. However, by 1996, this second club had also folded.

Re-formed in 1997 as Fleetwood Wanderers, the club was placed back in Division One of the North West Counties Football League (now the tenth tier of the English League system) and a sponsorship deal saw the club's name immediately changed to Fleetwood Freeport F.C.. The club was promoted to the Premier Division of the North West Counties League in 1999 and renamed Fleetwood Town F.C. in 2002. Tony Greenwood was appointed manager in 2003, and soon afterward, Andy Pilley took over as chairman. Successive promotions as North West Counties League champions in 2005 and Northern Premier League First Division runners-up in 2006 saw the club reach the Northern Premier League Premier Division. The 2007–08 season Fleetwood won the Northern Premier League, gaining promotion to the Conference North. The demise of Farsley Celtic partway through the 2009–10 was detrimental to Fleetwood's campaign, as Farsley's entire 2009–10 playing record was expunged. Fleetwood were chasing promotion along with near neighbours Southport, and the ruling cost Fleetwood three points relative to Southport. Fleetwood appealed against the decision but the appeal was rejected the day before the last match of the season, leaving Southport one point ahead. Both teams won on the final day, giving Southport the championship. Fleetwood instead had to contest the play-offs, and after be.ting Droylsden on penalties in the semi-final Fleetwood won promotion to the Football Conference by beating Alfreton Town 2–1 in the final. Fleetwood's 2011–12 season was their most successful ever. In the FA Cup they reached the Third Round for the first time. After beating Mansfield Town,Wycombe Wanderers, and Yeovil Town, they were drawn at home to local rivals Blackpool, but lost 5–1 to the Championship club, with Jamie Vardy scoring Fleetwood's only goal. In the league Fleetwood went on a 29-game unbeaten run, and were declared champions with two games remaining, giving them promotion to the Football League for the first time.

Highbury Stadium is a football stadium in Fleetwood, Lancashire, England with Wyre Borough Council as the landlords. It is the home ground of Fleetwood Town and is also used for home matches by Blackpool F.C. reserves. As of the opening of the new Parkside Stand on 16 April 2011, the ground has a capacity of 5,327. The ground was opened in 1939. An unusual feature of the stadium was the 'setback' on the west side of the ground. Both the main stand and the long covered standing area known as the Scratching Shed were set back from the pitch by a large gap. This was the legacy of the short period from 1948 to 1952, when the stadium was used for speedway with Fleetwood Flyers riding in Division Two of the National Speedway league. In 2008, when a new West Stand was built, it was constructed over the set back area, close to the pitch. To construct the stand, the builders had to clear about 5,000 tonnes of cinder and ash still left over from the speedway track.

This was to be my second trip to Highbury as my first visit had come in the Conference North Play off’s in 2010 when they faced Droylsden in the semi final they had trailed 2-0 from the first leg but won 2-0 to force extra time in extra time both sides scored again so it went to Penalties which Fleetwood won to set up a final tie with Alfreton (Which they won). At this point in time the new east stand wasn’t built so it was good to go back to see the impressive new stand. Droylsden are now Languishing in the Northern Premier Division (After being relegated last season) and Fleetwood are now in league 2 arguably all set for promotion to League 1 even at this early stage you wouldn’t bet against it (In fact I bet Fleetwood at the start of the Season at 15/8) 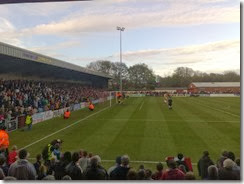 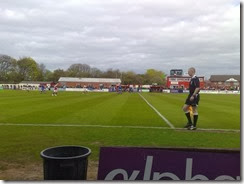 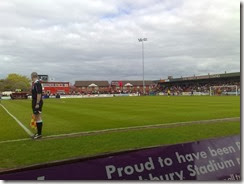 I nearly didn’t go and by the end of the game I wish I hadn’t gone this was probably about as poor performance as I had seen from Carlisle which was probably even worse than the previous Saturday against Boreham Wood, live on sky Sports to be nationally humiliated as well. We left Carlisle about 4.30 and travelled down to Lancaster and Junction 33 You can go all the way to 32 and along the M55 but its 10 miles shorter via the A6 although roughly the same journey time. We arrived about 6.15 and had time for a fish and chips at the Highbury Chippy. The fish was nice but I was slightly disappointed by the chips. In the 1st half we stood behind the away end but decided to move into the seated section for the second half. A short version of the Programme was available priced at £1.50. They also have a giant Screen TV now 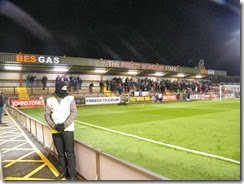 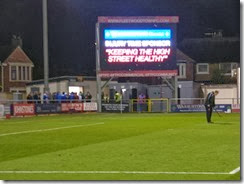 Greg Fleming was drafted into the side for his 1st start after Keeper Mark Gillespie was ruled out for 6-8 weeks but after 5 min’s he was picking the ball out his own net failing to hold onto Ball’s shot the ball fell to Sarcevic who cut the ball back for Ball to stretch out and tap the ball in via the crossbar.  In the 1st half Fleetwood were all over Carlisle having numerous chances but United managed to make it to half time 1-0 down unbelievably. In the Second half you would expect Carlisle to come out and try to get back in the game which they did but after 10 Minutes of the second half it was over as a contest a long pumped ball forward was misjudged by O hanlon and Sarcevic got past him to chip Fleming and make it 2-0. even though there was 35 Minutes left you knew by the body language of the Carlisle Players that united were done for. Fleetwood were well organised and if they had been more clinical then would have won this by 4 or 5 nil that’s how impressive they were and how poor we were. 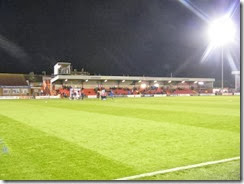 Again you come back to budgets and investments and you would probably guess that Fleetwood’s budget is far bigger than Carlisle’s and that’s mad given that they are the League below Carlisle and have been a Non- league side for most of there existence but that’s what comes with a multimillion pound investor that they have, something Carlisle lack and badly need. All the way home I began to question my loyalty to CUFC and I haven’t felt this rubbish about watching Carlisle since 1999-2000 but at that stage in my life I could just go out on the Saturday night get drunk and forget about it, but now these defeats plague on me for the rest of the week. I don’t watch Carlisle Away from home as much as I used to for this very reason I’ll never give up on United but I come seriously close every time we lose in this manner. I choose not to go to the next 2 home games mainly because Saturday I had no babysitter and Tuesday I didn’t see the point in taking a days holiday of work so I went to work, which was probably the right Idea as we struggled to beat Boreham Wood in the Replay. At the time of writing this I am still planning on going to Rotherham but things can change. 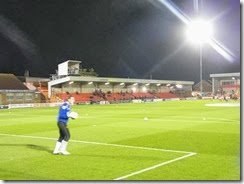 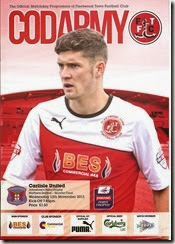