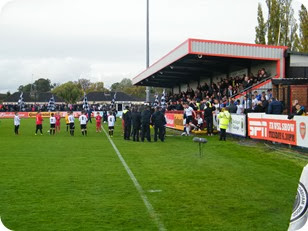 Boreham Wood F.C. are a football club based in Borehamwood, Hertfordshire, England, at Meadow Park football ground. They were established in 1948. For 2013–14 they will play in Conference South. They are affectionately known as "the Wood". The club was formed in 1948 by the amalgamation of two local sides, Boreham Rovers and Royal Retournez. In 2010 Boreham Wood won the Isthmian League Premier Division play off final to obtain promotion to the Conference South for the first time in their history.

Meadow Park is a football ground, located in Borehamwood, Hertfordshire, England. It is the home of Boreham Wood of the Conference South division, Arsenal Ladies of the FA WSL,Arsenal F.C.'s youth teams, and Watford Reserves of the Football Combination East division. The stadium has a capacity of 4,502. It consists of one seated stand with a capacity of 500, one covered terrace along the western side of the pitch and two un-covered terraces at either end of the pitch. although the western terrace has now been demolished with a new stand being built. Club chairman Danny Hunter said the £600,000 stand will run the full length of the Meadow Park pitch, creating 1,226 seats. It was due to be completed by Late October 2013 so they are obviously running late. 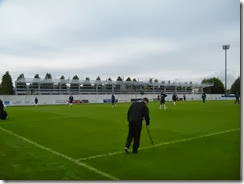 I was rather hoping this game would have been moved to the Sunday thus allowing me to get another ground in on the Saturday so as we waited and waited for the tie to be announced it become clear that the Women’s Champions League game between Arsenal Ladies and Glasgow City was due to be played here on the same day might have a bearing on the date. Arsenal Ladies then Announced Via Twitter than there game was Defiantly at Boreham Wood on Sat 9th of November at 1pm just 24 hours later Borehamwood then decided to announce via there Twitter feed that they were playing there at 2pm on the Saturday, cue much confusion amongst the CUFC supporters. In the end Arsenal ladies were told to do one and Boreham Wood took Preference (Arsenal Ladies then moved the game to Barnet). The 2pm KO gave me a headache as I don’t finish on a Saturday Morning till 0830. After much deliberation I decided to drive down. So After driving back from East Midlands Saturday morning arriving back in Carlisle at 0830 I immediately turned around and went straight back down stopping only to pick my boy up at home. I must have left home about 0910 and was in Boreham Wood by 13:20 which is not bad going for the 299 mile Journey using the toll road at Birmingham. Parking up on Northfield Road at the other side of the park. 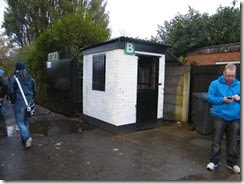 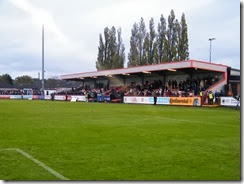 The game itself was a really poor game not only were Carlisle poor but they could have lost the game had Boreham Wood been more prolific. Carlisle dominated the first half as Sean O'Hanlon's header hit the post, before Lewis Guy forced Wood keeper into a great stop. Montgomery came even closer in the opening period against the run of play, when he turned and struck from a long way out to produce the best from visiting goalkeeper Mark Gillespie. But after the break, home forward David Moli, on loan from Wolves, saw a strike squeeze just inches wide of the post. Graeme Montgomery also shot wide for the Wood, Right at the death, James Berrett could have stolen victory for the Cumbrians, but his volley hit the side netting. Boreham Wood secured a trip to a side 76 places above them in the pyramid.

As It was we had survived and had a place in the hat for the second round draw. The replay will take place on the 19th of November but as it happens I have very few days off left to take so I won’t be their unfortunately . Fortunately I didn’t have to make the 299 mile journey home as we had booked a hotel in Coventry with the intention of driving the rest of the way Sunday.

Miles from Carlisle 299 Each way 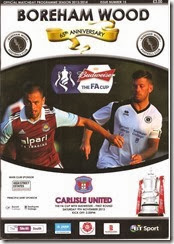 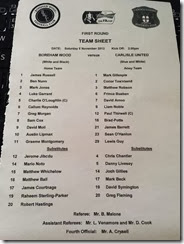