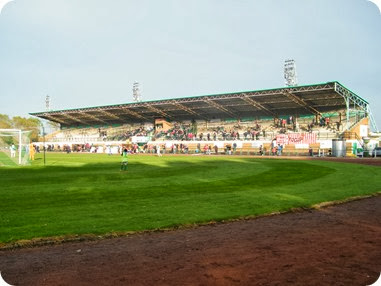 Billingham Synthonia F.C. is a football club based in Billingham, England. They were established in 1923, playing first in the Teesside League, and joining the Northern League in 1945. They are known for being the only club in England to be named after an agricultural fertiliser (Synthonia being a contraction of "synthetic ammonia", a product manufactured by ICI, with whom the club originally had a close connection), and being the only club to go an entire season (1950–51) in the Northern League without conceding a goal at home, a last minute penalty save in the final game by goalkeeper Harry Armstrong preserving this record. Their nickname is "The Synners" and they play a derby match against Billingham Town.
Synthonia most recently won the Northern League Division One in the 1995–96 season (having finished 2nd in 1994–95, as they did in 1996–97 and 1997–98) with other successes occurring in 1956–57, 1988–89 and 1989–90. They also won the Northern League Cup in 1951–52, 1987–88 and 1989–90. In the 2008–09 season on 13 April 2009, an 81st minute goal from an indirect free-kick by James McGowan [assist by Simon Shaw] after the keeper picked up a back-pass, gave Synners a 1 v 0 victory in the Durham Challenge Cup Final against Durham City. Synners replicated their 2008–09 DCC success, when they beat Ryton 2 v 0 on Good Friday 2 April 2010 to retain the cup.
Synthonia play at Central Avenue Stadium, Billingham. Their ground is also used by the Billingham Athletics club. The stadium was opened on 6 September 1958 by Lord Derby, with the first game ending in a 2–2 draw against Bishop Auckland. In the same year, the stadium was used for an England 'B' international athletics meeting. The stadium's 2,000 capacity cantilever stand was the longest in the country at the time. The most famous ex-Synner is Brian Clough, who appeared for the club before he went on National Service.
We set off from Carlisle and first went Swimming in Darlington before heading up to Billingham for KO arriving at 3pm the programmes were sold out. The ground has 1 main stand which has seating and standing in it. the rest of the ground is open as there is a running track around the pitch although you can walk round the other side of the pitch. 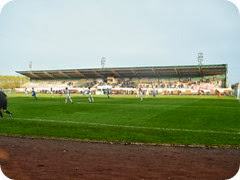 The game itself was a tight affair with the only goal of the game coming in the 68th Minute when Hughes saw his shot blocked then Michael Sweeton hand to fire home the rebound into the net. The Guisborough Town Substitute Clarke was harshly sent off late on and Billingham were able to hang on to seal a place in the next round of the Vase.
Ex Carlisle Watch 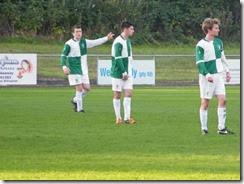 As A new feature I have decided to mention any ex Carlisle Players and update on their careers after they had left Carlisle. Todays feature is Matthew Osmond who was on a YTS Contract with Carlisle in the 2009-10 & 2010-11 seasons. Matt was nice enough to contact me through Twitter (You can follow him here http://twitter.com/mosmond93 ) to explain what he’s been up to since leaving Carlisle. When originally told he wasn’t getting a full time contract at Carlisle he went on Loan to Billingham (His home town club) for the rest of the 2010-11 season. For the 2011-12 & 2012-13 season he went to the USA to play for Lander Bearcats in South Carolina he stayed there for 2 seasons before returning to Billingham for the 2013-14 season Osmond plays as a left midfielder, He did well in this game a few through balls to the forwards just short and would have set up a good attack had they reached there targets. It was hard to pick out a MOM in this game.

Miles from Carlisle 93.5 Each way