Barnet Football Club is an English professional football club based in Barnet, London. For the 2013–2014 season, the club will participate in the Conference Premier, the fifth tier of English football. The current head coach is Edgar Davids.

Since 1907 the club have played at Underhill Stadium, situated in the town of Barnet within the London Borough of Barnet. The club will move to The Hive Stadium, situated in Canons Park in the London Borough of Harrow, for the 2013–14 season. Barnet FC were formed in 1888, having formerly been known as New Barnet FC (1885–88) and Woodville FC (1882–85) before ceasing to exist in the 1901–02 season Two local clubs, Barnet Avenue FC (formed 1890) and Alston Works AFC (formed 1901) continued to attract support. Barnet Avenue renamed themselves Barnet FC in 1904. Alston Works AFC, later Barnet Alston FC, were formed in 1901, and became champions of the London League in 1906–07 After merging with the Avenue team in 1912 they spearheaded the new Athenian League as Barnet and Alston FC. After the First World War in 1919 they became the third instance of Barnet FC. This team continues today. They have been in the Conference since the Start of the 2013/14 season although they have been in the league on 2 occasions winning the Conference in 1990-91 and 2004-05. They have won the Southern League Division one in 1965-66 and Division One South in 1976-77.

Barnet's old home ground of Underhill Stadium, had a capacity of 6,023. It was also used by Arsenal F.C. Reserves. It was thought that Barnet would move from Underhill at the end of the 2011–12 season to an unknown location due to a dispute about the contract lease on Underhill with Barnet Council, but July 2012 Harrow Council agreed for the development of a new stadium called The Hive Stadium at the Prince Edward Playing Fields which the club can use for a period of up to 10 years. In February 2013, Barnet's move to the new ground was ratified by The Football League. 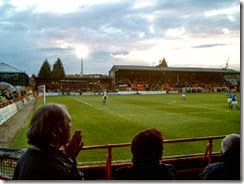 Construction of the stadium, at the Prince Edward Playing Fields in Canons Park, began in 2003 as a new home for Wealdstone F.C.. In 2004, Wealdstone's investment partners in the project went into liquidation, bringing construction work at the site to a halt. Harrow London Borough Council put the site up for tender in 2006, and Barnet F.C. won the right to occupy the site as a result of this. On 1 August 2007, Barnet chairman Tony Kleanthous announced that he had acquired a 44-acre (180,000 m2) site in Harrow. The deal would see Barnet contribute £6 million towards an £11 million development, which would include training facilities for Barnet's first, reserve and ladies teams, as well as a 5,000 stadium for nearby Wealdstone. The plan also provides for a second, smaller 'green' 1,000 capacity stadium, for ladies and youth football, as well as a centre of excellence and community use facilities. In early 2008, Wealdstone issued a press release stating that the chairman and vice-chairman had acquired a majority shareholding in Ruislip Manor Sports and Social Club (RMSSC), which owned the lease to the Grosvenor Vale stadium, then used by Ruislip Manor and also by Wealdstone's Youth Team. With the ground share agreement at Northwood coming to an end and still no specific completion date in sight for the Wealdstone Prince Edward Playing Field project, Wealdstone instead decided to invest in the Grosvenor Vale stadium to upgrade the playing facilities as a priority, in order to meet the necessary ground grading requirements to play Isthmian League Premier Division football. In April 2009, a delegation from the Barnet Football Club Supporters Association (BFCSA) visited the site and interviewed the man overseeing the construction and continued development, Paul Fairclough. A video made during the tour shows the work being carried out, throwing up some new, previously unknown information about the site, such as the construction of a swimming pool and jacuzzi, and the fact that Highbury's floodlights were currently being stored there. The interview was particularly revealing, indicating that the development is in the first of four planned stages (suggesting a stadium for Wealdstone is still a possibility), that there were hopes to have the England senior team hold training camps there, and that the proposed centre of excellence would cost £250,000 per year to run. There was also some indication of how Barnet could financially exploit the site, and attain a degree of self-sufficiency, as they were in the process of doing a deal with an organisation to rent out the astro turf pitches for £30,000 for one year. In addition, up to £180,000 per year is available to Football League clubs to run their youth systems. In May 2009, it was reported that Harrow Borough and Wealdstone are in negotiation with Barnet to use the training facilities.The training ground is known as "The Hive" and was opened by Fabio Capello and Trevor Brooking on 15 December 2009. Since then, major teams visiting London, such as ex-Premiership club Hull City, Italian side Parma and the Egyptian, Bulgarian, Swedish and Brazilian National Squads, have made use of the training facilities.

The Hive Stadium is a 5,100 capacity stadium in Barnet, in the London Borough of Harrow on the former site of the Prince Edward Playing Fields, the new home for Conference National side Barnet. The club intend to move into the stadium for a 10-year period from summer 2013 onwards due to disagreement with Barnet London Borough Council with regards to the lease of the land surrounding their home since 1907, Underhill Stadium, as well as the limited facilities at Underhill restricting the club's income. The awarding of the Barnet Copthall site to Saracens F.C., effectively ending Barnet F.C.'s hopes of ever moving to the site, accelerated the move to The Hive further 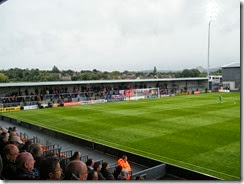 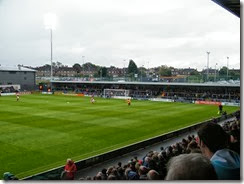 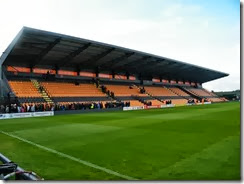 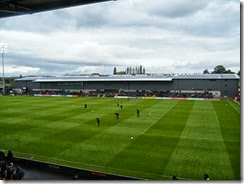 Tickets for this game had been reduced 50% off so it meant I paid £11.50 for me and £2.50 for the boy So after checking out of the Hotel we made our way to Ruislip for Dinner intending to visit the Ruislip Lido but it was bucketing it down so we decided to just have lunch the head for the football. We arrived at the Hive bang on KO at 2pm on a Sunday afternoon parking up near the Cannons Park Tube Station and walking through the gate adjacent to the Station although the main entrance is at the other end of the Complex at the Camrose Ave Side closer to Queensbury Tube Station.

In a game broadcast live on BT Sport, Barnet player-manager Edgar Davids was sent off for elbowing a Wrexham player in the face during a mêlée after a couple of crunching tackles caused a bit of a stir. The Dutch Legend became embroiled in a “20 man brawl” late on in the Conference Premier clash at the Hive Stadium.The tackles were flying in before the referee blew his whistle for a foul. A few players started arguing before almost everyone else got involved and eventually Davids elbowed Stephen Wright in the face, sending him stumbling backwards. In the interest of balance, we should also mention that Stephen Wright was also dismissed for his part in the bust-up, quite what for am unsure Wrexham skipper Dean Keates equalised from the resulting free-kick before Wrexham’s 90th minute substitute Johnny Hunt was shown a red card a shorty after play resumed. Anthony Acheampong had given Barnet an early lead, heading in Jack Saville's cross.

The ground itself has a temporary feel about it with the club to believe the stadium at The Hive to be a temporary arrangement, with the long term aim to build a 10,000 capacity stadium in the London Borough of Barnet. 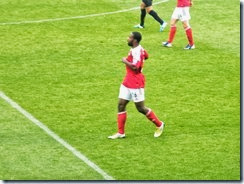 As A new feature I have decided to mention any ex Carlisle Players and update on their careers after they had left Carlisle. Todays feature is Joe Anyinsah Joe signed for Carlisle on loan from Preston NE in September 2007 his 1st goal come away at Bournemouth in a 3-1 win he had 3 months on loan but Carlisle were unable to agree a permanent deal for him to return despite Carlisle wanting to sign the player in the January Transfer window. In March 2008 he went on loan again this time to Crewe. In January 2009 Joe returned to Carlisle for an Un-disclosed Fee. At the end of the 2009-10 Season he was offered a new deal but turned it down to pursue a move closer to his home in Bristol with a 59 Appearances and 16 goals. He signed a 1 year deal at Charlton for the 2010-11 Season but was hampered by Injuries playing 19 games scoring 3. Eventually signing for Bristol Rovers in 2011 he stayed for 2 years playing 62 games scoring 8 goals before being released. He signed for Wrexham for the start of the 2013/14 Season.

I think it’s safe to say his best form was at Carlisle United. He didn’t get much of a chance in this game but you could see he still has his pace and has a little bit about him. 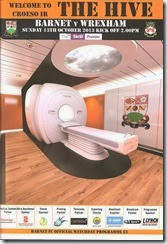