Welling United Football Club was founded in 1963, by Sydney Hobbins a former goalkeeper with Charlton Athletic for his sons Barrie and Graham.They began as a youth team playing in local league football on a park pitch, they gradually expanded and began playing Saturday football in the London Spartan League. In 1977 they moved to the Park View Road ground, which had previously belonged to the defunct Bexley United (historically called Bexleyheath & Welling). On 12 August 2010, the club was served with a winding-up petition by HMRC, due for a hearing later that month. The Wings were given 14 weeks to pay the outstanding debt to the HMRC, and thanks almost entirely to the supporters were able to raise £60,000 to clear all monies owed. During this period, in a Football Conference Hearing on 16 September 2010, Welling United admitted to a misconduct charge in connection with the outstanding HMRC debt. Resultantly an immediate deduction of 5 points was enforced on the club together with a suspended £5,000 fine.Welling made a return to the top level of non-league football last season after clinching the Conference South title (2012-13), 13 years after they last played at the fifth tier of English football. 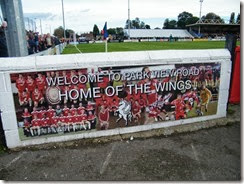 Welling United play their home matches at Park View Road, Park View Road, Welling, London, DA16 1SY. This ground has been their home since 1977 when they took over the ground which had been vacated by the defunct Bexley United. Prior to that date the club had played at a community sports ground in Butterfly Lane, Eltham. Having been unoccupied for some time, the new ground was almost derelict. Erith & Belvedere have been ground sharing since the 1999 season. Improvements were made to the Park View Road ground in 2004, which included a new covered stand.

As a result of severe storms and gale force winds in December 2006, the floodlights at Park View Road were damaged. Due to safety reasons all the floodlight pylons on the Welling side of the ground were removed. The floodlights were put in place during the month of June 2007 and are fully functional, one pylon positioned in each corner.

After watching the England match the night before at Wembley we had stayed overnight in the Days Inn at South Mimms Services. On the Saturday Morning we made our way to Cockfosters Tube station catching the underground to Tower Bridge we had Breakfast at a Cafe down by the bridge on Shad Thames. We always go there to start our day with a bacon roll will have to get the name of it at some point. after that we walked over the bridge to Tower gateway catching the DLR to Royal Victoria so we could again catch the Emirates Cable Cars over to Greenwich (My son seams to love this and would gladly ride on it all day). We then caught the tube from North Greenwich to Lewisham, then catching the train to Welling which Arrived in Welling at 1442 (Not much time I know). Arriving on the North side of the Station from London we turned left out the Station then Left again under the railway line, before turning left again and Walking the 3/4 of a mile walk to the ground Which is just after the Earl of Warwick pub. You pass the Weatherspoon pub The New Cross Turnpike just halfway down the high street. It took us around 15 min’s although you could do it on the buses if I’d have known I’d have caught the bus. The ground is on the right on the main High street so there’s no chance you’ll miss it 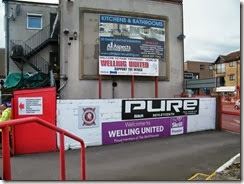 Welling moved up the table with a 2-0 victory over Tamworth Second half goals from Lee Clarke and Loick Pires gave the home side the three points but had it not been for Cameron Belford in goal and the crossbar for the Lambs, the score line could have been much larger. After 63 min’s the home side took the lead as Guthrie’s headed layoff found Clarke whose looping header just crept under the bar for the skipper’s fifth goal of the season.  As the game entered its final stages, Cargill’s header from Obersteller’s corner was blocked on the line in front of a mass of players but the 17 year old wasn’t going to be kept out of the action for long. The defender charged down the left wing just a minute later before picking out a perfectly weighted ball to Pires in the box. This time made no mistake and slotted the ball past Belford for a 2-0 lead which his overall play in the game deserved. A good Win for Welling but Tamworth had there chances despite being poor all afternoon 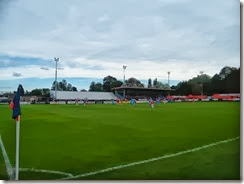 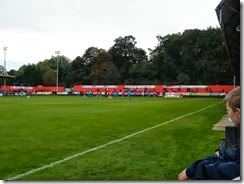 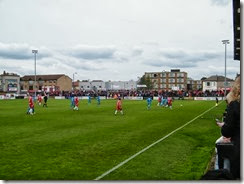 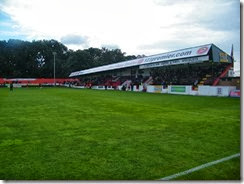 The ground is an open one so you can walk right round although when larger opposition arrive they tend to section the away fans off behind the goal. On one side is the Main Welling stand and changing room and on the other is the Erith & Belvedere Stand which houses there dressing rooms and clubhouse.

After the game we caught the Bus from Outside the ground and it was Heading to Lewisham Station so we decided to stay on it right the way to Lewisham and catch the train to Charing Cross from their rather than Welling. 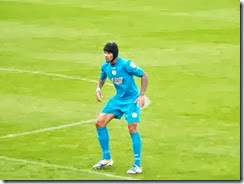 As A new feature I have decided to mention any ex Carlisle Players and update on their careers after they had left Carlisle in the first of my features is the Giant 6ft + Ben Richards-Everton who Signed for the Carlisle Youth team on the 24th August 2009 at 17 having been on trial for the pervious month. He only lasted up until 14th January 2010 having his contract terminated by Mutual Consent. He was like many players who sign for Carlisle a long way from home and probably struggled being so far away from friends and family. It was strange to see him leave Carlisle as he had played in nearly every Youth team game in his short time there. The Youth team played on the 12th of December 2009 then didn’t play again till the 23rd January 2010 by this time he’d left his last youth team game was the 2-0 defeat to Burnley on the 12th of December in which he was substituted after 72 Min’s.  After Leaving Carlisle he spent time at Cradley, Romulus and Hinckley before being signed by Tamworth on the 13th March 2013. He didn’t have the best of games and was taken off in the 77th minute probably to avoid a red card after picking up a yellow one. He looks a real gem with his size and stature just needs games and experience at this level. he’s still young so could go on to better things.

Ticket Price £15 for Adult and Child