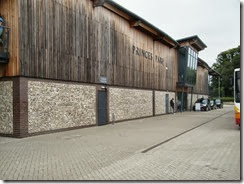 Princes Park is a football stadium in Dartford, Kent, England. It is the home of Dartford F.C. and Dartford Roadrunners. The stadium's postcode is DA1 1RT, the closest possible representation of the word "Dart". DA1 1FC was unobtainable, as the letter C is not allocated for use at the end of British postcodes. The stadium is owned by Dartford Borough Council.
Construction work began on 14 November 2005. Designed by Alexander Sedgley architects, the stadium has a capacity of 4,100 (642 seated), and has been described as one of the most ecologically sound ever built. The pitch level is sunk two meters below the external ground level to reduce noise and light pollution. It is estimated to have cost around £7 million. The stadium was opened on 11 November 2006 when Dartford FC, who had been without a home ground in the borough since 1992, beat Horsham YMCA4-2 in an Isthmian League Division One South league fixture, in front of a capacity 4,097 crowd.
The environmental aspects of the stadium include - The stadium roof has a sedum roof blanket, a living roof that provides a natural air filtration system. solar panels on the roof serve the community changing areas and public toilets hot water storage cylinders. The roof is supported by treated Glulam timber beams. Water recycling system which serves the toilets within the clubhouse. Rain water is collected in the two large ponds at the north end of the stadium grounds. Under floor heating on both levels of the clubhouse. Low energy lighting. Increased fabric insulation to give the clubhouse better thermal retention and efficiency. Condensing boilers to provide a more energy efficient system. Also excavated earth was reused for landscaping the external courtyard areas around the stadium. 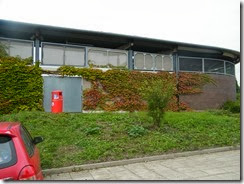 The stadium has received a number of commendations for its design and environmentally friendly features. The Royal Institution of Chartered Surveyors acknowledged the stadium for being "green", and the venue has received significant publicity in the national press.Princes Park was the winner of the GT Ground Awards, "Best New Non-League Ground" award. saying, "Let's hope other forward-thinking councils will follow their lead." On Sky Sports Soccer AM show in April 2007, Fashion designer and architect Wayne Hemingway said of Princes Park "It’s got a grass roof all the way around the outside, it’s got solar panels it’s totally sustainable and creates its own electricity. That’s the way that buildings should go, it’s just fantastic, and it’s definitely the best stadium in the country." Adding that "the absolute number one new stadium in the country is from a club that is in the conference - Dartford" ahead of Arsenal's Emirates Stadium and the new Wembley Stadium.
Dartford Football Club is an English association football club based in Dartford, Kent. The club participates in the Conference Premier, the fifth tier of English football. They will play in the very top level of the English Non league Pyramid for the 2012-13 season, for the first time since 1985 They Won the Isthmian League Div 1 in 2007-08 then the Premier in 2009-10. They won the Conference South play off Final in 2011-12 to gain promotion to the Conference.
We made our way down from Rugby on the London Midland train to Euston were we arrived in Euston at 0945 we spent the morning walking round by Tower Bridge. The Bridge came up to allow to boats to pass through something I had not seen before. Then taking a ride on the Emirates Cable Cars over the Thames the views from the top are really good you can see the Olympic Stadium, West Hams Upton park as well as the O2 Arena and Excel Arena. 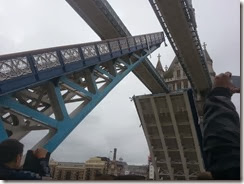 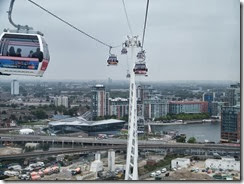 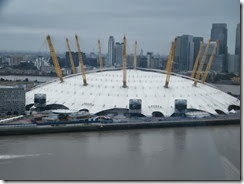 We landed on the Side next to the O2 Arena and after walking to the Tube station at North Greenwich, We took the Tube to Canary Wharf joining the Dockland Light Railway to Greenwich Station were we caught the train to Dartford passing the Valley Stadium as Charlton Played Millwall.
We were in Dartford for around 1345 we took a short walk to the Weatherspoons in Dartford called the Paper Moon we had a quick drink. We walked through Central park towards the Stadium, it took about 20 Min’s if you pass the Kids playground your in the right direction. 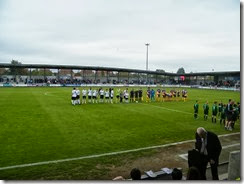 Dartford ended their four-match winless run in style with an emphatic victory over Kidderminster Harriers. The hosts took the lead on 34 minutes when Jason Prior registered his first goal of the campaign from close range. Elliot Bradbrook slotted home to double Dartford's lead on 51 minutes before Danny Harris sealed all three points from 12 yards just past the hour. Harriers struggled to respond but came close to a consolation when Anthony Malbon's free-kick flew wide late on. The visitors were without both skipper Kyle Storer and centre-half Chey Dunkley, who both withdrew through injury. 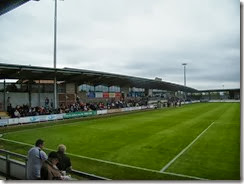 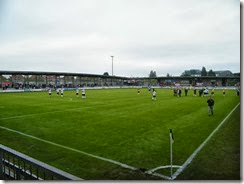 Really enjoyed Dartford a great game and a excellent stadium an excellent design and model for some non league clubs. Former Carlisle Player Josh Gowling was in the Side for Kidderminster and Didn’t have the best of Games. Nathan Collier for Dartford Really impressed me at the back for Dartford. 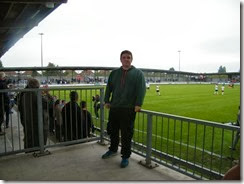 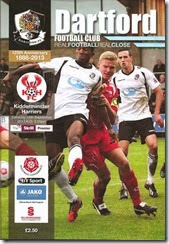