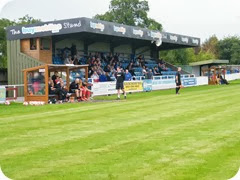 Mickleover Sports Football Club is an English football club based in the Mickleover suburb of Derby,Derbyshire. They are members of the Northern Premier League Division One South. The club was formed in 1948 and spent the first 44 years of their existence competing locally in the Derby and District Senior League. In 1993, they joined the Central Midlands Football League Premier Division, gaining promotion to the Supreme Division two years later. They moved up to Northern Counties East League Division One in 1999, and in the 2000–01 season reached the 4th round of the FA Vase. Their most recent promotion, to the Northern Premier League, occurred at the end of the 2008–09 season. They were relegated back to Division One South after the 2011–12 season.

The Club play at the Raygar Stadium formerly known as The Mickleover Sports Ground and more commonly referred to as Station Road In 1982 the club embarked on a ambitious campaign to develop a new football and cricket facility on meadow land at the junction of Station Road and Radbourne Lane in Mickleover. This involved a concerted effort by the members, over the next ten years, to, embark on a fund raising drive for the £30,000 + needed for the development of the land. This work finally began in 1992 and was completed later that year and formally opened. 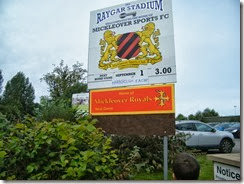 I left Carlisle around 10:00 arriving in Mickleover around 1300 having lunch at the Nags Head in Mickleover itself which is right in the centre of Mickleover I can well recommend Sunday Lunch here before going up to the ground for around 2.40 Parking at the ground itself in the small car park at the side of the ground.

The ground itself has a clubhouse behind one goal with a small Terrace there. Along the side is the Cricket pitch on the other side is a small Stand and a covered terrace, the dugouts, a programme shop and tea stand. Behind the far side is a small terrace. I recommend having a good look in the Programme shop. 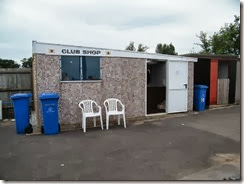 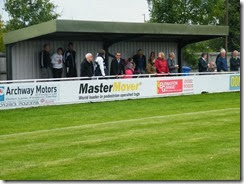 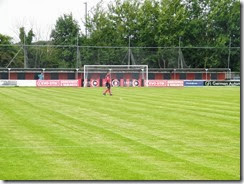 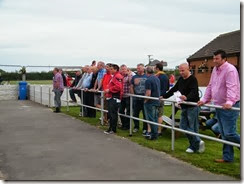 Mickleover Sports were the stars of The FA Cup on Sunday as they beat Harborough Town 8-0 in their Preliminary Round tie.
The Northern Premier League First Division South side were in fine form as they dominated their opponents, scoring five goals in the second half. I didn’t get a chance to note all the scorers down but a fine easy win for Mickleover who could have had more goals then the 8 they got the gulf in class obvious

Miles from Carlisle 182 Each Way 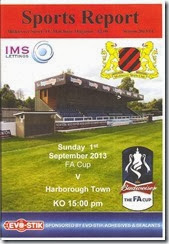