Arbroath or Aberbrothock /ɑrˈbroʊθ/ (Scottish Gaelic: Obar Bhrothaig, [opəɾˈvɾo.ɪkʲ]) is a former royal burgh and the largest town in the council area of Angus in Scotland, and has a population of 22,785. It lies on the North Sea coast, around 16 miles (25.7 km) ENE of Dundee and 45 miles (72.4 km) SSW of Aberdeen. Arbroath F.C. are a Scottish football club currently playing in the Scottish League One. The club were founded in 1878 and play home matches at Gayfield Park they have been in League one since 2010-11 when they won the old Third Division title Securing there first honours in there history. Arbroath had never won a trophy until then only changing divisions by way of finishing runners up.

Arbroath's Gayfield Park is not its original ground (which was nearby) and was known as Lesser Gayfield, its current stadium is the closest to the sea in Britain, an traditional style ground exposed to the elements, where the traditions of 'real football' are still observed where opposition fans mix as they change ends at half time to stand behind the oppositions goals. With terracing on three sides and enclosed stands on all four sides. On stormy winter days, waves beat on the walls surrounding the ground. This is truly a gem of footballing tradition and is essentially the ground that saw in excess of 13,500 fans at a Rangers cup game in attendance Rangers will again visit this season in the League. Only in recent times have games at Gayfield been cancelled due to over cautious decisions by referees due to ground frost, games at Gayfield never used to be postponed due to the free draining sandy soil and salt air – it was effectively all-weather. Sadly, excessive health and safety concerns in recent years, have meant more frequent cancellations in recent due to excess wind, frost, snow, fog, and rain. Gayfield is a short 10 Minute walk from Arbroath Station as you arriving in Arbroath from the south if you look to your right you will see it and the nearby Pleasure land Arcade. 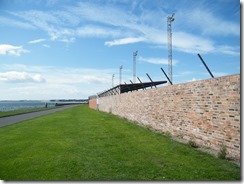 Their most notable achievement is that they hold the world record for the biggest winning score in world senior football, the record for the biggest victory in World senior football, was set on 12 September 1885 when they beat Aberdeen Bon Accord 36–0 in a Scottish Cup match with a further goal disallowed for offside. Jocky Petrie scored 13 goals in that game, a record for the most goals by a single player in a British senior match. By coincidence, on the same day in another Scottish Cup match, Dundee Harp beat Aberdeen Rovers 35–0. 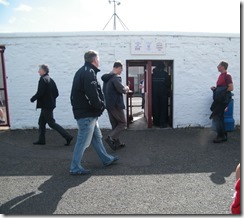 I left Carlisle on the 09:48 destined for Glasgow Central then making the short walk to Queen Street for the 1141 to Arbroath via Perth and Dundee Arriving in Arbroath at 1318. We then made the walk to the sea front and on to the Pleasure land Arcade staying there till just before KO the Price of a ticket is £15 for an Adult and Child with normal prices at £12 and £6 the Programme was £2 and team sheet was 25p 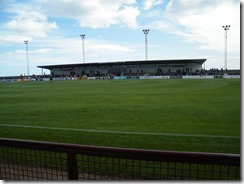 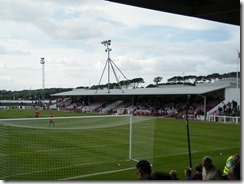 The game itself was a entertaining one

Lee Erwin scored twice on his debut. The 19-year-old striker on loan from Motherwell opened the scoring after 15 minutes with a powerful drive following a long ball from Robert Linn. They combined again 15 minutes later, Erwin collected a short corner from Linn and smashed a screamer into the roof of the net. Robert Barr pulled a goal back for the visitors in the second half through a deflected right-footed strike. That came after Manager Paul Sheerin came close to stretching Arbroath's lead when his left-footed shot from the middle of the box was parried away by goalkeeper Graeme Smith. Brechin came close to an equaliser when Steven Jackson's free-kick smacked the crossbar. but Arbroath held on for the 3 points and an Impressive win. Debutant Lee Erwin was a handful the opposing defenders and on anther day could have had a hat-trick 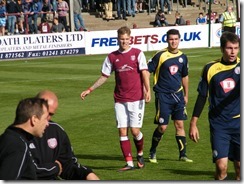 We had to leave just before the end to make sure we caught the 1656 back to Edinburgh as this was the last train with a connection to Carlisle. We got off at Haymarket and waited for the 1856 back to Carlisle back home at 20:15

A good day out by the Sea the boy enjoyed the Arcade and had we had longer we could have done more, I could have drove but after spending 3 hours at work Saturday morning driving from East Midlands to Carlisle driving another 3 hours would have been too much. 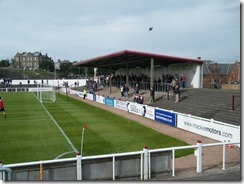 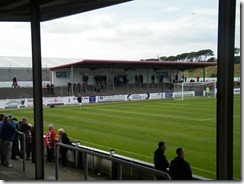 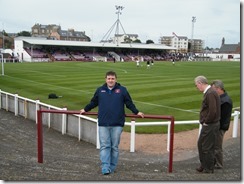