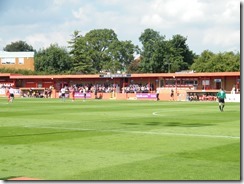 Alfreton Town Football Club is an English football club based in Alfreton, Derbyshire, The Club plays in the English Conference The club was reformed after a merger between Alfreton Miners Welfare and Alfreton United in 1959. They were Promoted to the Conference in the 2010-11 Season as Champions of the Blue Square North. North Street also known as the Impact Arena Capacity is 3,600 with 1,500 seats. It has been there home since 1959. The Impact Area is just under a mile from Alfreton Train Station. 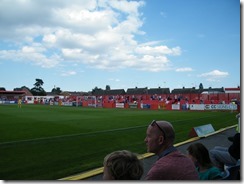 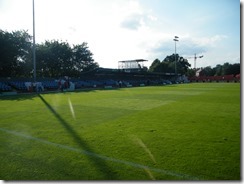 The Impact Arena is a Old fashioned mixture of mostly old terraces which have been converted to seats Behind the goal on the Home side is a old fashioned open terrace which has had seats installed into it. The Tom McRoy stand runs alongside one side which is also old terrace that has been converted. on the other side is the Main stand which houses the Changing rooms and offices

The away end is Open terracing and a tin Shed 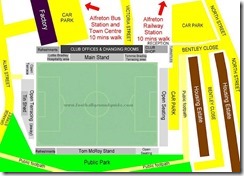 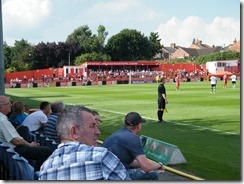 I set off from Carlisle slightly late and after losing time on the A66 and A1 I arrived at North Street at 1505 missing the 1st 5 min’s the parking isn’t great its all local street parking but was able to find a curb to park up on. I’d paid £18 and £12 for me and the boy which is a silly Price for a Non League side especially the £12 for my boy I know the club operates a junior red scheme which means kids can pay £3 if they buy a membership card but this is not much good to a seasoned ground hopper like myself. I also see you can save £2 buy buying in advance, but again with last minute changes to plans I can commit to buying tickets in advance. If I had been delayed anymore on the way down I would have gone to Worksop Town as I was Considering it whilst slowly moving on the A1 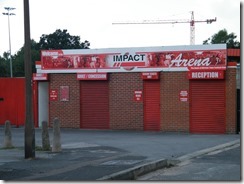 As I entered the ground John Job Ayo Akinde stooped low in head in a cross and put the reds 1-0 up this was the 12th Minute.Herefords Chris Bush had a free-kick well saved by the Alfreton Keeper in the 17th Minute. Josh Law (Son of the Manager) somehow missed from ten yards when teed up by Akinde on 27 minutes, then five minutes later Akinde smashed the ball against the bar from the edge of the area. just before half time Hereford got an Undeserved Equalizer when Bush’s Long throw was flicked on by Smith only to land to Chris Sharp who was able to finish for close range.

5 Min’s into the Second half Hereford full of Confidence had a shot from West which was well saved by the Alfreton Keeper Atkins. , then Wishart hammered the ball against the foot of the post after a neat swivel on the edge of the area in the 55th minute. Artus forced Atkins into a 77th minute save, then ten minutes later Nick Fenton's back post header lacked enough power to trouble Evans from a deep Law free-kick. With a Minute left on the clock from a throw in Alfreton’s Fenton flicked the ball on and Josh Law rose highest to head the ball towards goal the Hereford Keeper was unable to reach it and it landed into the back of the net to give Alfreton the 3 points. Josh Law and John Akinde were both impressive Akinde was a real hand full in the first half but faded in the second, whilst Law was constantly busy in the Midfield he is the Son of the Manager Nicky Law and Brother of Rangers Player also called Nicky Overall Alfreton just about deserved the points Hereford at times looked poor and were holding out for a draw wasting time towards the end with players going down injured etc.

Attendance 740 with 181 from Hereford