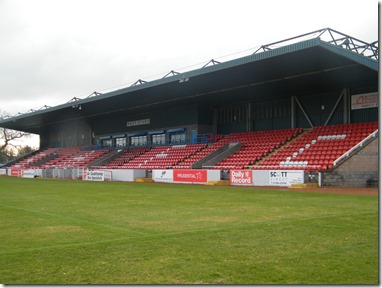 The city of Stirling is clustered around a large fortress and medieval old-town beside the River Forth. Historically it was strategically important as the "Gateway to the Highlands", with its position near the boundary between the Scottish Lowlands and Highlands, indeed, it has been described as the brooch which clasps the Highlands and the Lowlands together. Its historical position as the nearest crossing of the Forth to the river mouth meant that many of its visitors were in fact invaders. Once the capital of Scotland, Stirling Castle contains the Great Hall (restored 1999) and the Renaissance Palace (restoration completed 2011) a Castle that rivalled any building in Europe at the time, The Castle dates from at least early 12th century, present buildings mostly built between 1490 and 1600. Stirling also has its medieval parish church, The Church of the Holy Rude, where King James VI was crowned King of Scots on 29 July 1567. The Holy Rude still functions as a living church with a service every Sunday. Stirling also has the the National Wallace Monument is a tower standing on the summit of Abbey Craig, a hilltop near Stirling in Scotland. It commemorates Sir William Wallace, the 13th century Scottish hero. Stirling is famous for the Battle of Stirling Bridge which On 11 September 1297, the forces of Andrew Moray and William Wallace defeated the combined English forces of John de Warenne, 6th Earl of Surrey, and Hugh de Cressingham. 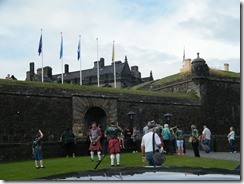 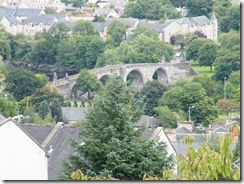 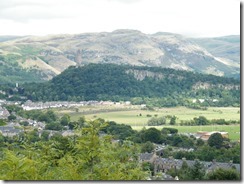 Stirling Albion are a Scottish League 2 club based in the town of Stirling in Stirlingshire. This the clubs 2nd Season in the newly named Scottish League 2 since a double relegation in 2010-11 and 2011-12. Stirling's home ground is Forthbank Stadium, a 3,808 capacity stadium in the east of the city near the banks of the River Forth. Before the stadium was opened in 1993 the club was based at Annfield Stadium which had been the home of the club since it was founded in 1945. On 2 July 2010 it was announced a that chairman Peter McKenzie had agreed to sell his majority shareholding to the Stirling Albion Supporters Trust. Stirling Albion are the first Scottish Football League club to be 100% owned by a fans trust. Forthbank is located on the outskirts of Stirling, next to a retail area. Stirling railway station is about 1.5 miles away from the ground. 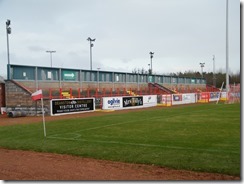 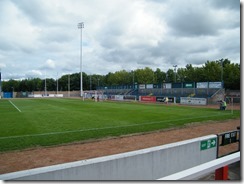 Forthbank has 2 Main Stands Either side and 2 terrace’s behind each goal only the Main Stand on the West Side of the Ground is open unless a large crowd is expected. 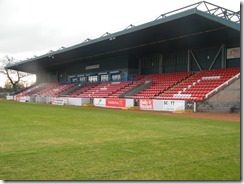 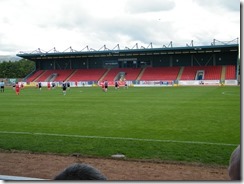 We set of from Carlisle around 1030 and has expected to spend some time at Stirling Castle and the Wallace Monument but after overdosing the kids at nearby Kidzworld in Alloa I decided to just to head up to Stirling Castle and take some photo’s from there. Stirling itself is a Stunning city and the Views from the Castle are amazing it was a tad busy and thus slowed out day down the Car Park itself is £4 and the Castle itself is extra but we has ran out of time. We made out way down the ground for around 1445. Programmes had sold out so was left with a T/S only 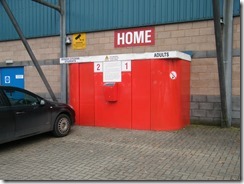 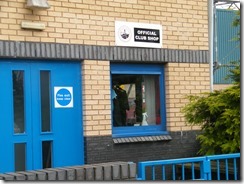 East Stirlingshire kept us their 100% start to the season with a 3-1 win at Forthbank. Last season Stirlingshire were beaten 9-1 by Stirling but they weren’t going to be beat this time around.  The first chance came on five minutes when McGregor’s long ball to Wright with keeper David Crawford was coming off his line to block the ball going out for a corner, from the resulting corner Shire went ahead as Bolochoweckyj rose to flick home Wright’s delivery. Wright rattled the post with a 15-yard shot in 19 minutes and the second arrived just after when the winger pounced on Ross Forsyth’s short pass back and laid it back to Quinn to finish empathically. Half time 0-2

On 53 minutes the third arrived and again Wright was involved. He latched on to Iain Thomson’s free-kick into the box and fired a shot off the post, with McKechnie there to tap home this was after a little bit of Stirling Pressure. Stirling pulled one back on 80 minutes with their first shot on target as White swept the ball into the net after a Weatherston delivery. 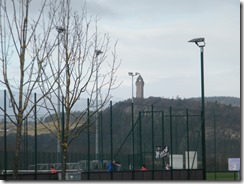