St Johnstone have been in the Scottish Premier League since the 2009-10 Season, They are based in the Scottish Town of Perth. Although it is officially recorded as being formed in 1884, the club did not play its first game until February 1885. The club's home since 1989 has been McDiarmid Park. The nearest Train Station is Perth which is over 2 miles away. The ground itself is on the outskirts of town close to the A9. St Johnstone have won the Scottish First Division (Now the Scottish Championship) 7 times and won the Scottish Challenge cup in 2007-08. St. Johnstone F.C. had played at Muirton Park since 1924, but it had fallen into disrepair by the 1980s. St. Johnstone was then a Second Division club and did not have the funds to repair it. In December 1986 the club received the news that Asda wanted to purchase Muirton Park and the adjoining ice rink to build a supermarket on the site. In return, the club would be relocated, at no cost to them, to a brand-new stadium at the western edge of the city.A local farmer, Bruce McDiarmid, donated 16 acres of land on which the stadium now stands. The going rate for the land at that time would have been approximately £400,000 but Bruce McDiarmid saw a donation of his "berry and barley fields" as a gift to the people of Perth. At the insistence of St. Johnstone he accepted a 20 per cent shareholding and the title of honorary president of the football club. McDiarmid Park, the first purpose-built all-seater stadium in the United Kingdom, consists of four covered, single-tier stands. 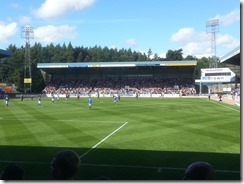 In 2011, plans to demolish the 2,000 capacity North Stand (Shown above full of Hearts Fans) were publicised. This would allow Perth and Kinross Council to build a commuter link road from the neighbouring A9 road into Perth. St. Johnstone chairman Geoff Brown justified the proposal on the grounds that comparable clubs, such as Inverness and St. Mirren, have since built grounds with smaller capacities. 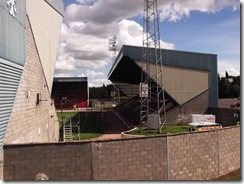 The South Stand is named the Ormond Stand, after Willie Ormond, a successful manager of St. Johnstone who left the club in 1973 to manage Scotland. This is the Stand I was to go into as it was a Family stand with mixed supporters with both home and away families housed in this stand. An Adult and Child Costs £15 in this Stand where as its £22 and kids are £11 elsewhere

Where the anticipated away support is expected to be of a size where it is not possible to operate the Ormond Stand as a mixed family stand then the club undertakes to provide a fixed number of 'adult and up to two kids aged 12 and under' packages in whatever stand the away support is accommodated in.” 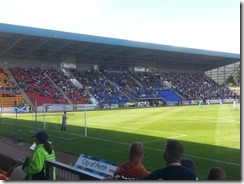 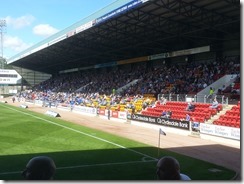 In June 2013 Steve Lomas left the club to manage Millwall and Tommy Wright was appointed as his replacement. In his first competitive game in charge, Wright lead St. Johnstone to a 1-0 victory against Rosenborg BK in Norway. This was the club's first away win in Europe in over 40 years and after drawing 1-1 in the second leg at Home in front of 7,850 fans they went through to the 3rd Qualifying round to play Minsk. They subsequently won away again 1-0 but lost the home leg 0-1 eventually losing on Pens 3-2 AET in front of 8594

Me and the boy set off around 1030 after dropping the wife of at work we headed up the M74 and M9 stopping off at Blackford to visit the Tullibardine Distillery Visitor Centre to pick up a bottle of whisky for my old man. Arriving in St Johnstone at around 1330 we parked in the B&Q car park after seeing the £5 parking fee for the main car park as it seamed to be free as there was no Parking enforcement signs. 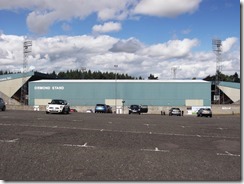 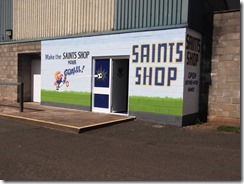 After a short walk around the ground we entered the ground around 1420 after they had eventually opened the turnstiles. I haven’t been able to write a report so I have just copied the report from elsewhere

The hero of St Johnstone's second leg against the Norwegians was striker May and it was the 20-year-old who was the chief tormentor of Hearts. In close succession early on, the pony-tailed forward earned a free-kick from a mistimed Kevin McHattie challenge and then glanced a header wide from Steven MacLean's fine cross. An excellent looking McDiarmid Park surface was put to good use by Hearts, too, as Callum Paterson, who missed the end of last season through injury, shot two yards wide. Steven Anderson's defending against European opposition has been top notch but his tangling of legs on the edge of the box with Ryan Stevenson perhaps should have resulted in a Hearts free-kick.  St Johnstone's goal caught Hearts off-guard but the scorer was no surprise. MacLean found May wide on the left and in a seemingly unthreatening position, but the former Hamilton and Alloa loanee dribbled inside Brad McKay and curled a speculative shot past Hearts goalkeeper MacDonald at his far post. Gary Locke's men managed to survive any further breach of their goal before half-time but that should not have been the case given Anderson's two headed chances for Saints - one well saved and the other badly missed. Full-back McKay's back-post header gave the visitors a sniff of goal before normal service was resumed with David Wotherspoon's free-kick troubling MacDonald in the Hearts goal.The industry on show from Saints starlet May was on-going and his blocked shot should have been finished off by MacLean's diving header to make the points safe. But Hearts failed to muster anything to seriously test home goalkeeper Alan Mannus and St Johnstone recorded a narrow yet convincing win, making it four competitive games unbeaten in the new season.

6,174 crowd at McDiarmid Park of which 3,335 were Hearts fans a massive sign of intent from the Hearts fans for the difficult season ahead but god knows where the home crowd had gone from the Europa League game. After the Game we were straight home arriving back home in Cumbria for 1930 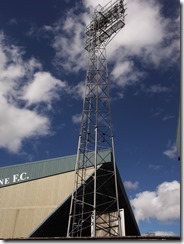 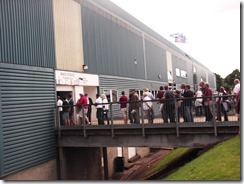