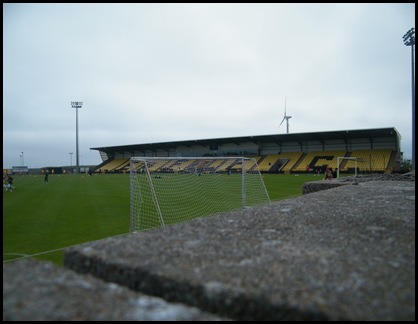 East Fife have been a Scottish Second Division Side since the 2008-09 season they are based in the Scottish town of Methil in Fife. There is no Train Station in Methil with the Nearest Station being Kirkcaldy some 10 Miles away. Like many railway lines the Fife Coast line fell victim to the Beeching/Marples cuts, with passenger services being withdrawn in 1969. Freight services for Methil docks, Methil power station and the Cameron Bridge distillery kept the line going until the late 1990s. The line remains in place to this day but much of it is in very poor condition. The Club itself was formed in 1903. East Fife Won the Scottish Fa Cup in 1938 and have won the league cup 3 times 1948,1950 and 1954. They won the Scottish Second Division in 1948 and the Third Division in 2008

The Bayview Stadium was opened in 1998 after the club moved from the Original Bayview park which was in the town centre. The site of the stadium is near the mouth of the River Forth and the pitch was previously overshadowed by Methil power station, which was demolished in April 2011. The Stadium holds 2,000 people and has one main stand, which will cause a problem this season when Rangers FC come to town. There was plans to create a second stand at the sea end of the Stadium but this has been put on hold.for a guide to East Fife’s Bayview Stadium Visit:- Here 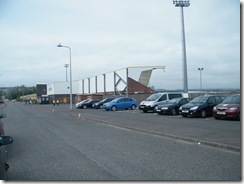 Due to there being no Railway Stadium myself and fellow Cumbrian Adam Decided to drive up to Methil. We decided on the way to pop in past a few grounds. We went up the M74 to Albion Rovers and Airdrionians before joining the M8 towards Edinburgh we branched off towards the Forth Bridge and crossed over towards Fife on the M90 then onto the A92. We then went past Cowdenbeath and Raith Rovers. Upon leaving Kirkcaldy we followed the A955 towards East Fife arriving at the ground at 1415. Parking is just on the roadside by the stadium. We collected some team sheets and had a look in the club shop. We then decided to go round the back of the Stadium to get some Pictures of the Stand, as we were taking photo’s a nice lady who was a director invited us into the stadium to take a few pictures from inside after we had explained who we were another director then showed us round the inside of the stadium. This was a nice gesture again something we normally see more often in Scotland than in England 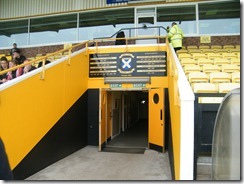 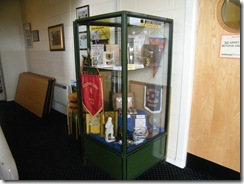 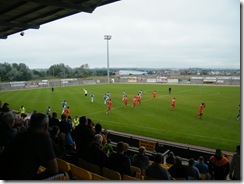 The 1st Chance fell on 10 Minutes when Jamie Stevenson Fired wide from a free kick then on 11 Mins a long ball over the top was flicked on by Russell then Greg Stewart was clean through on goal only to send his shot wide a few moments later after a bad pass at the back Russell had a long shot which was tipped wide by the Fife keeper.

In the Second half from a corner East Fife had a free header at goal but Gormley saw his header saved by the keeper. Gormley managed to cut out a pass at the back and raced towards goal only to see his tame effort saved. The game was beginning to heat up and after a few yellow cards Stevenson for Cowdenbeath and Bouzid for Fife were both sent off for pushing. Russell was again sent clear for Cowdenbeath only to see his shot parried by the goalkeeper. The game finished 0-0 you can view Highlights :- Here