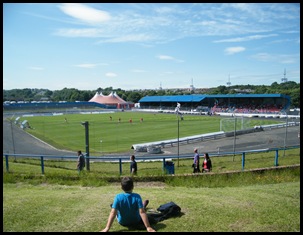 Cowdenbeath have been a Scottish Division 1 team since the 2012-13 season they are based in the Scottish town of Cowdenbeath in Fife. The Club plays its games at Central park which is 0.3 miles from the Train Station of Cowdenbeath. The ground has a racing track around the pitch which regularly hosts stock car racing. They are managed by former Wolves player Colin Cameron.

Cowdenbeath traditionally date their origin to the merger of two local clubs, Cowdenbeath Rangers (formed 1880) and Cowdenbeath Thistle, which occurred in 1881. However, research by the club's historian suggests the Cowdenbeath Rangers name continued to be used at this time and the founding of Cowdenbeath F.C. should properly be dated to 1882, when another merger saw Rangers combine with a local club called Raith Rovers (formed 1881 and unrelated to the present Kirkcaldy club). The establishment of one club to represent the town thus coincided with the establishment of the Fifeshire Football Association that year. Cowdenbeath, who are the oldest surviving football club in Fife. Cowdenbeath have won the Scottish 1st Division on 3 Occasions 1913-14, 1914-15 and 1938-39

Central Park has a capacity of 4,370 they moved in when it opened in 1917 a record crowd of 25,586 seen them play Rangers in 1949 they have been rumoured to be moving stadium and as recently as 2011 they submitted a formal application for planning permission for the redevelopment of their Central Park site for retail and housing. And some of the receipts would fund a new community stadium but this seams to have not developed yet. for a comprehensive guide to Central Park Visit Duncan Adams’s excellent site http://www.footballgroundguide.com/scotland/cowdenbeath.html 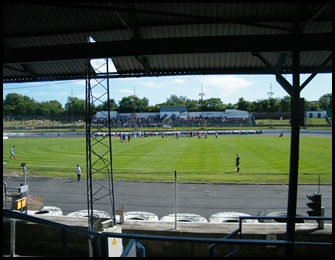 The this game due to the location close to the train station I decided to let the train take the strain. Catching the 11.00 to Edinburgh we arrived in Edinburgh for 1220 a quick visit to Rose Street a visit to Primark and a food stop at McDonald's and we were back to Waverley for the 1348 to Cowdenbeath arriving into Cowdenbeath for 1430 the ground its basically across the road and under the railway bridge. I arrived at the ground and paid the £10 and £5 Adult and Child admission fee before buying my programme. We watched the 1st half from the grass verge behind the goals but moved at half time to the main stand for the second half. The game itself was a dull affair and the only real chance of the 1st half came when Chris Porter tapped into the net from close range. In the second half Jordan Morton fired in a 25 yard shot into the net for 1-1 and that’s how it finished. Cowdenbeath gave the Visitors a good workout and more than matched them English League One side in the Second half. This game was probably typical of a pre-season game. 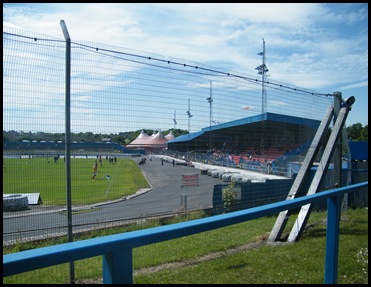 After the game I made my way back to the Station Catching the 1655 back to Haymarket. Waiting for the 18:17 back to Carlisle we grabbed a bite to eat at a fast food restaurant behind the station. Arriving back in Carlisle at 1940 a few min’s late.