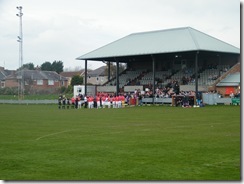 Shildon A.F.C. is a football club established in 1890 based in Shildon, County Durham, England. They compete in the Northern League Division One and play at Dean Street. Established in 1890, Shildon joined the North Eastern League in 1907 and have won the Northern League title five times in their history. They had a very successful history in the 1930s. Shildon's nickname is The Railwaymen after the wagon works that was the major employer in the town for many years. They are sometimes called by the nickname The Shells. Shildon play at Dean Street. Bishop Auckland also played at Dean Street for a couple of years in a ground sharing agreement whilst building their new stadium, Heritage Park.

It was an Early Start for my Bank Holiday Monday as I picked up friend and fellow hopper Adam at 9am for our trip over to the North East to see the Fa Vase winners Spennymoor in action. Moors we given a guard of honour as they had just returned from London after winning the Fa Vase at Wembley. Moors had only 4 players in the starting line-up who had played at Wembley just two days earlier, most of the players probably still worse for wear from the Saturday Night celebrations. Shildon took the lead on the half hour when a Owens shot hit the post and bounced out for Garvie to tap in. On the hour slack defending by Shildon let Ruddy free and he shot into the bottom corner to make it 1 - 1. it was all Spennymoor from then on as top draw saves from the Shildon Keeper keeping the Moors at bay 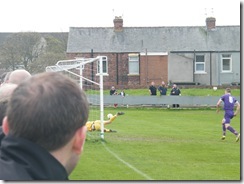 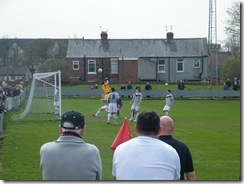 Shildon had a rare chance in the final moments as Brumwell had a header saved from the Spennymoor keeper Knight.

Another good day out in the Northern League managed to pop up past Consett’s Bell Vue ground after the game to get some photo’s before its demolished and back in Cumbria by 3.30 which is always a bonus despite the early start