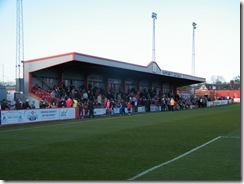 Tamworth Football Club is an English football club based in Tamworth, Staffordshire. The club participates in the Conference National, the fifth tier of English football. The club were formed in 1933 after the previous Tamworth club, Tamworth Castle, ceased to exist. They originally played at The Jolly Sailor Ground but after a year moved into The Lamb Ground. Local rivals include Burton Albion and Nuneaton Town, and to a lesser degree Atherstone Town, Bedworth United and Bolehall Swifts. The team are currently managed by Dale Belford.

The Lamb Ground is a football stadium in the district of Kettlebrook, in Tamworth, England and the home of Tamworth F.C. It is approximately half a mile south of Tamworth railway station. The ground was named after "The Lamb Inn", which stood for many years at the entrance to what is now the ground's car park. The first known use of the site was as a pig farm at the turn of the 19th century. Before Tamworth arrived at The Lamb Ground it is believed that Kettlebrook Oakfield F.C. used the ground. In those early days, players had to change in the Lamb Inn and run down to the pitch, but facilities have been slowly built up to include changing rooms and a clubhouse, as well as 'cover' and seating for spectators.

After leaving Bolehall Swifts I arrived at the ground at 1700 and parked up in the main car park for £2 after buying a programme and a shirt from the shop I entered the ground via the home turnstiles paying the £14 for a seat in the stand. Tamworth didn't wait for results elsewhere to go their way this afternoon, they went out and did the job they had to do at the Lamb. A 2-1 win ensured the club stayed in the Conference for next season, the second time Dale Belford had led the Lambs to last-day success in the fight against the drop. Things did not start so well for the Lambs, though, as after making a bright start, in which they could have earned a penalty when Lee Hendrie went down in the 15th minute, the Lambs went behind on 20 minutes. The goal came after a corner on the right hand side, one that Richard Tait got his head to, but only managed to divert it to Jayden Stockley who headed home from the far side of the penalty area.that lead came out of the blue. It was to only last 16 minutes as Tom Marshall pulled some magic out of the hat to relight the Lamb crowd ten minutes before the break. The defender showed all the class and calmness of a seasoned centre-forward as he pulled down the ball on the edge of the area and curled it round the last defender and in the far post past the diving Aaron Howe. They were rewarded for their efforts in the 60th minute when Hendrie, who was denied a spot-kick in the first-half, got one in the second, the Tamworth number eight brought down by Mike Cestor. 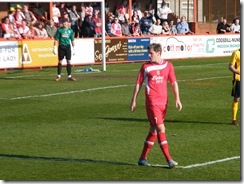 Adam Cunnington stepped up and slammed home the resulting penalty to give Tamworth a deserved lead with half hour remaining. 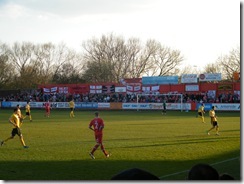 Tamworth sat-back after the goal, safe in the knowledge that the result was enough to keep them in the division this season. No risks were taken, no quarter was given at the other end, the Lambs players did what was needed to ensure that the result stayed a positive one. at the end of the game there was a mass pitch invasion as the Tamworth fans celebrated a win that kept them safe in the Conference for another season. 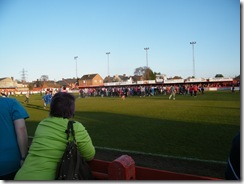 This was Probably the 3 time I have seen Tamworth play and the tall number 7 Adam Cunnington is a fantastic player add that to the former England Midfielder Lee Hendrie and with Darren Byfield and Tommy Wright there is plenty of skill there and experience too. 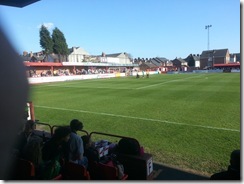 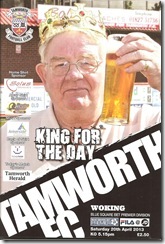