Forfar Athletic Football Club are a Scottish semi-professional football club from the town of Forfar, Angus. They are members of the Scottish Football League and currently play in the Second Division. Nicknamed the Loons (a Northern Scots word for a young man), they play their home games at Station Park, in the north end of Forfar. The club are nicknamed "the Loons" The club were founded in 1885 when the second team of the older Forfar club called Angus FC, broke away to form Forfar Athletic. Angus FC had been the town's senior club for a number of years, and on 24 September 1883, amalgamated with the Junior club Forfar West End, which became the 2nd XI, taking the name Angus Athletic. The demise of Angus in 1885 prompted the second string to go it alone and in early 1885 became independent as Forfar Athletic. One explanation for the origins of the Loons' moniker is that the second string were younger than the first team, so over time people would say "I'm off to watch the Loons" ("Loon" being a local dialect word for a young man). The club were admitted into the Scottish Football League in the 1921–22 season, entering the new Second Division.

Station Park is a football ground in Forfar, Angus, Scotland. It is home to Scottish Football League side Forfar Athletic. Station Park is one of a number of old fashioned football grounds left in the Scottish League. It has a capacity of 6,777 although this has previously been much higher. The record crowd being 10,780 against Rangers in 1970. The total has been reduced for safety reasons. The ground allows access to all four sides of the pitch. There is one large terrace behind the goal at the western end of the ground. Called the "mert end" because a cattle market is just over the wall this area is reserved for visiting supporters when occasion and numbers demand separation of fans. 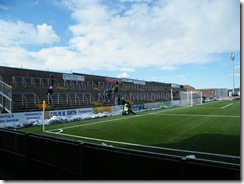 A seated grandstand, opened in 1959, is on the north side of the pitch. 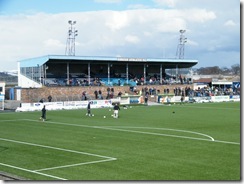 There is a covered terrace on the south side of the ground and further, uncovered, terracing to the east 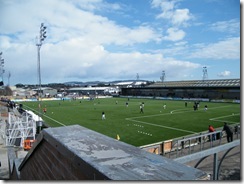 The ground, as the name suggests, was once close to the town's railway station, situated on the Caledonian Railway's main line from Aberdeen to Glasgow and London, but this station was closed in 1968 as part of the Beeching cuts. Station Park is now one of the furthest Scottish League grounds from a railway station (Peterhead's Balmoor ground is further). The nearest train stations to Forfar are Dundee and Arbroath, both of which are approximately 14 miles away. As a result Station Park is best reached by road.

Having left Montrose at F/T we made our way along the road back over the bridge towards Arbroath and the A92 then we branched off onto the A934 towards Forfar then Across the A933 onto the B9113 past Montreatmont Forest and Rescobie Loch, coming into Forfar on Montrose Road Parking up on Carseview Road which runs long past Station Park. so we were Virtually just at the front gates.

Upon entering we made our way to the club shop to have a look before taking a walk round the ground. it was about 1430 when we arrived so we had plenty of time to take a few photo’s before kick off. The ground from the outside look’s small but inside its huge the Large terrace towards the west of the ground is fantastic and will look great when full of Rangers fans probably next season, unless they are lucky enough to gain promotion to Division 1

The game itself was great. There was a large away following from local rivals Arbroath. Arbroath took the lead when Hamilton crossed for Doris to bang home. The tide was with Arbroath but from nothing Forfar Equalized Swankie threading a threw ball to Denholm who was able to score past the keeper. In the Second half Forfar took the lead when McCulloch’s ball found Swankie inside the visitor’s half and his first timed pass into Chris Templeton path was inch perfect, the ball was fired home a goal which would have been worthy at the top end of football. The led didn’t last long Arbroath equalized shortly after when a hesitant defence allowed Hamilton to smash home. From a corner Arbroath took the lead when Travis headed home Sheerin’s corner and Sheerin wrapped up the points in the final minute when he ran past 2 defenders and curled a long range effort into the top corner.

The ground itself was fantastic and had loads of Character and will look great next season when full if Rangers Visit. Its a 3g Pitch which is still in good shape. The programme is a good read and at £1.50 is Value for Money. I can recommend the Scotch Pie too. A much better game than the first match we had visited anyway. After the game we made our way back down to Cumbria arriving home for 8pm ish 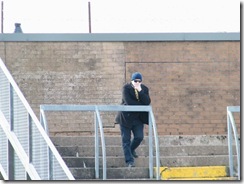 During the game we met up with Bas a Dutch Ground hopper who had travelled over to Britain for the bank holiday weekend we had a chat during the second half and I look forward to bumping into him again sometime. 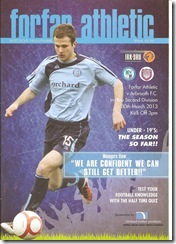 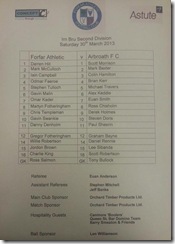