Montrose Football Club is a Scottish semi-professional football team, based in the town of Montrose, Angus. They are members of the Scottish Football League and currently play in the Third Division.The club were founded in 1879 by Harvey Price and play at Links Park. They joined Scottish Football in 1923, along with near-neighbours Brechin City, in the newly founded Scottish Third Division Links Park is a football stadium in Montrose, Scotland. It has been the home ground of Montrose since 1887. Links Park was opened in 1887.  to help finance the new ground, Montrose F.C. rented the pitch out for circuses and livestock grazing. The club was eventually able to raise £150 in 1920 to buy a stand, that had been previously used by the Highland Games. A roof was built over the Wellington Street end of the ground in the 1960s. Floodlights were installed in 1971. The record attendance at the ground was 8,983, for a Scottish Cup quarter-final tie against Dundee in March 1973. Links Park was significantly improved in the 1990s, after the club was taken over by Bryan Keith.The wooden Main Stand was replaced by a cantilevered stand, seating 1,258 people. GlaxoSmithKline provided a £250,000 grant in 2006 for the club to install an all-weather surface at Links Park. The turf is a FIFA two-star artificial surface. The current stadium capacity is 4,934. The all-seated Main Stand (South) has a capacity of 1,324 with the West Stand terrace holding a maximum of 1,582 spectators. There is also uncovered standing areas on the North and East sides off the ground. 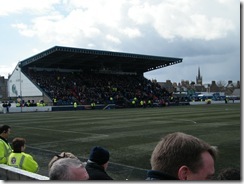 Leaving Carlisle at Around 7am we made our way up the M74, M73, M80, M9, A9 then A90 Stopping off for breakfast at Dundee. I then made our way along the A92 towards Arbroath driving past Arbroath’s Gayfield Park. then further along the A92 towards Montrose Crossing over the bridge into Montrose we made our way to the Park Hotel to collect the Match tickets from the reception after the Chairman Derek Sim had kindly arranged 2 tickets for us to collect, really kind of the chairman to take the time out to do this for us. I believe he also did this for the Dutch ground hopper Bas who I met at the Forfar game later on. The game was a 12 o clock kick off live for ESPN coverage. We had parked on a side street directly behind the Park Inn which was a 5 minute walk to the entrance. 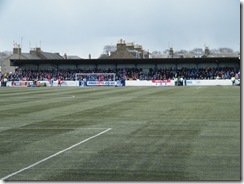 The game itself was a dull 0-0 but Montrose had the better chances. The first shot came in the 18th Minute when Lee Wallace had a shot tipped over. Then Alan Campbell headed wide for Montrose from a free kick. Martin Boyle Came really close to heading a goal, but he could only send his header wide from a cross. 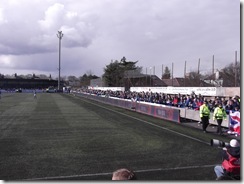 The second half started with Montrose’s David Gray blasting over from outside the box. Montrose appeared to have taken the lead in the 66th minute following a scramble in the Rangers box. Terry Masson’s half volley was parried down by Alexander, Boyle reacting fastest to poke the ball into the net. But referee Kevin Clancy ruled that Alexander had been fouled as Boyle took his shot. Towards the end Montrose’s Winter had a low free kick tipped wide of the post.
David Templeton almost snatched a late winner for Rangers, his shot deflected into Gibson’s hands, while centre back Emilson Cribari’s overhead kick was also held. 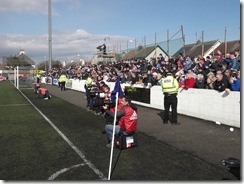 The Final whistle brought Cheers from the home crowd as they had held the side who had won 54 League titles and soon to be 55 which would be confirmed later that day when Queens Park failed to win. Rangers looked a shadow of the team I had seen play in the SPL a few years Previous, and really looked devoid of organisation and idea’s. 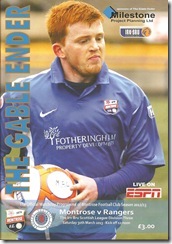 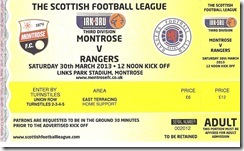 The ground itself was as you’d expect for the Scottish Third Division but the large main stand is Great for that Level. The Programme was £3 which was obviously inflated to cash in on the Rangers game but it was a fairly good read. A really nice sunny day even if it was a little on the chilly side.