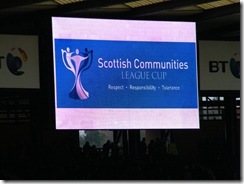 The Scottish League Cup is a football competition open to all Scottish Football League and Scottish Premier League clubs. At present it is also known as the Scottish Communities League Cup owing to the sponsorship deal in place with the Scottish Government. In the past it has been sponsored by Coca-Cola, Skol Lager, Bell's whisky and Co-operative Insurance. The competition, like the Scottish Cup, is currently a straight knockout format.

The competition is open only to the 42 senior clubs who compete in the Scottish Premier League (SPL) or Scottish Football League. There are no replays, so all matches ending in a draw after 90 minutes are decided by extra time and, if necessary, penalty kicks. The four teams who, based on results of the previous season, have qualified for UEFA competitions are given a bye until the 3rd round of competition, together with the highest placed SPL finisher not in UEFA competitions. The seven teams who finished highest in the SPL/SFL without qualifying for Europe receive a bye into the 2nd round. The remaining 30 teams begin play from the 1st round. They are drawn into random pairings with the games played at the stadium of the first team drawn. The 15 teams advancing from the first round are drawn together. The teams who advance from the 2nd round are joined by the final five teams in the 3rd round, with seeding in place. The remaining rounds of competition are unseeded. 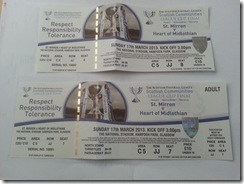 The semi-final matches are played on a neutral ground, traditionally Hampden Park, but the home ground of a third club located close to the two competing clubs is sometimes used. The final game is also traditionally played at Hampden Park in Glasgow, though due to renovations some finals in the past have been played at other venues such as Celtic Park or Ibrox.

Hampden Park (often referred to simply as Hampden) is a football stadium in the Mount Florida area of Glasgow, Scotland. The 52,063 capacity venue serves as the national stadium of football in Scotland. It is the home venue of the Scotland national football team and amateur Scottish Football League club Queen's Park and hosts the latter stages of the Scottish Cup and Scottish League Cup competitions. It is also used for music concerts and other sporting events.

There were two 19th century stadia called Hampden Park, built on different sites. A stadium on the present site was first opened on 31 October 1903. Hampden was the biggest stadium in the world when it was opened, with a capacity in excess of 100,000. This was increased further between 1927 and 1937, reaching a peak of 150,000. The record attendance of 149,415, for a Scotland v England match in 1937, is the European record for an international football match. Tighter safety regulations meant that the capacity was reduced to 81,000 in 1977. The stadium has been fully renovated since then, with the most recent work being completed in 1999.

The stadium houses the offices of the Scottish Football Association (SFA), Scottish Premier League and Scottish Football League. Hampden has hosted prestigious sporting events, including three Champions League finals, two Cup Winners' Cup finals and a UEFA Cup final. Hampden is a UEFA category four stadium and it is served by the nearby Mount Florida and King's Park railway stations. 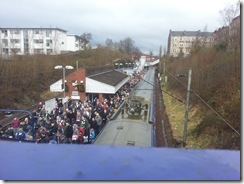 We Made our way via the West coast mainline up to Glasgow Central then from there we took the football Special to Mount Florida were the ground is a short walk from there. arriving at the ground we bought a flag and a scarf before entering at the back of the North Stand. On my 2 Previous Visits to Hampden with Queens Park and for the Scottish FA Cup final in 2010 I was in the South Stand 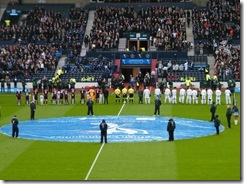 St Mirren Lifted there first trophy for more than 25 years as they beat Hearts 3-2. Ryan Stevenson's deflected shot put Hearts ahead on 10 min’s and a John Sutton header and Mehdi Taouil shot should have added to their lead. Hearts were to pay for missing them chances. St Mirren’s Teale was already running at full pelt when Thompson played a killer pass down the inside-right channel. Frozen Hearts looked for offside, Teale looked for Goncalves, and his pass across the area allowed the Portuguese to side-foot home with confidence.

After the interval they moved into the lead with their first attack, Dummett crossing for Thompson who lashed the ball past MacDonald from 12 yards. On 66 Min’s On-loan Newcastle midfielder Newton worked a one-two with Goncalves on the edge of the box and smashed the return ball early from 16 yards to deny MacDonald the chance to narrow the angle. Heart’s Stevenson who rose to the challenge to try to drag Hearts level. When he won two challenges outside the St Mirren box and stung the palms of Samson with a controlled drive, then Stevenson stole in at the back post to shoot but his effort skimmed off the crossbar. He was not to be denied for long, though, as he set up a nail-biting final four minutes with an angled shot that lacked power but somehow crept past the slow-to-react Samson and into the bottom corner. The keeper redeemed himself when he denied the same player a minute from time at his near post and St Mirren hung on to spark wild celebrations among their nerve-shredded fans.

We left at full time not waiting to see the Trophy lifted and made our way back to the Station we had 5 min’s to change at Glasgow Central before catching the 1740 back to Cumbria. This was one of the best games I have seen for a while 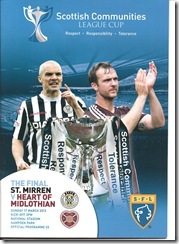