Guiseley Association Football Club is an English football club based in Guiseley, West Yorkshire. They play in the Conference North. Founded in 1909 by a local group of enthusiasts. The club plays at Nethermoor Park, which has a capacity of 4,000, with two seated stands totalling 500 and two terraced stands

My day started out with a trip through Bradford to Visit Odsal and Valley Parade I Managed to get a good few photos from Odsal but was unable to get inside Valley Parade. I managed to arrive in Guiseley for 1300 and treated me and my son to a Fish and Chip Supper from Harry Ramsdens First chip shop. Unfortunately it has now been taken over by Ramsdens rival The Wetherby Whaler. 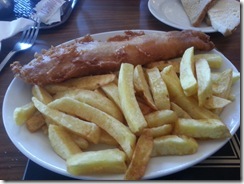 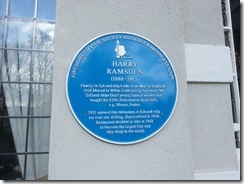 The Fish was lovely and the kids portion that was £4.95 was the same size as the adults and came with a free toy which was great value. 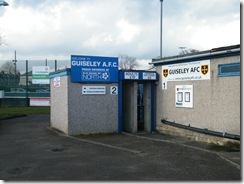 We arrived at the ground for 1420 and paid a reasonable £10 for me and £2 for my son. The game itself was a dull affair and if fairness neither side deserved to win. Guiseley are second in the table to Champions in waiting Chester, and Josh Wilson’s Penalty gave them a Narrow Victory over Solihull who were reduced to 10 men in the second half. The Visitors started the strongest and Craig Bower’s clearance early on was the first chance before Jasbir Singh fumbled a Guiseley shot but nobody followed up. Dominic Langdon’s push on Josh Wilson gave the home side a Penalty in the 32nd Minute and he got up to take the penalty sending the keeper the wrong way. 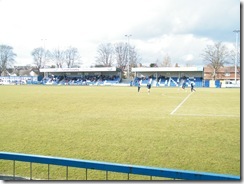 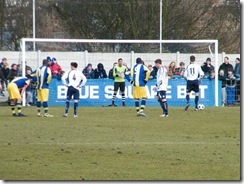 In the Second half Stuart Pierpoint was sent off for a second Bookable offence after a late tackle. Guiseley nearly scored not long after that when Wayne Brooksby’s shot was parried by the Solihull Keeper and Broadhurst’s clearance nearly rebounded into the net, Guiseley then comfortably finished the game off to gain another 3 points an inevitable play off spot seams likely. They are now 16 points behind Chester with 2 games in hand and 19 points clear of Harrogate in 6th with 10 left to play. Guiseley will need to need to be much better if they are to avoid play off heart break again 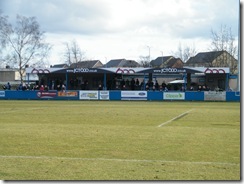 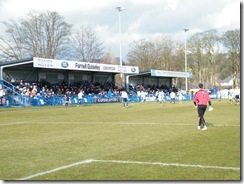 I spent a large part of half time ratching through the club shop looking for Carlisle Programmes and managed to purchase a few, in fact I probably cleared them out the gentleman in there was very helpful. 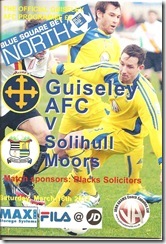 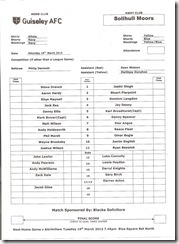