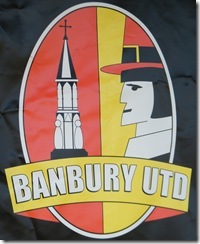 Banbury United is a football club based in Banbury, Oxfordshire, who play in the Southern League Premier Division. They are nicknamed The Puritans and they play their home matches at the Spencer Stadium. They were originally named Spencer Villa.Banbury United were founded in 1931, when they were called Spencer Villa. At this time it was essentially a works club. In 1934, they changed their name to Banbury Spencer and moved to the Spencer Stadium. They had a lot of early success, winning most of the leagues which they played in.

Spencer Stadium is Banbury's home ground. It is situated next to the town's railway station on Bridge Street in the Grimsbury ward of the town. The stadium has a capacity of 2,000 and has a 250 seat stand called the 'John Nicholls Stand', named after the club's sponsor. Oddly enough it isn't positioned in the middle of the touchline but towards the town end of the ground with roof pillars obscuring the view from many seats. The rest of the stadium is in a dilapidated state and very often only three-quarters of the floodlights are operating. The roof of the Town End stand was blown off by strong winds in 2007, but has been reconstructed.Banbury United have been playing at the ground since 1934. It is thought that the roofing, which was partially blown down, is probably the only part of the ground which was originally there when Banbury United moved into the ground.

In 2010, Banbury United, in correspondence with Cherwell District Council, announced a proposed move to a new stadium, which would be built near to the proposed site of a new housing estate based near the Bankside area of Banbury. The proposals seem to be on hold subject to financial constraints.

My Intention was to complete the 200 at a foreign ground 2nd March but I decided to bring this forward to Sun 24th Feb and go to Feyenoord V PSV but unfortunately I was unable to get tickets, despite being in Rotterdam. So this game 2nd of March became my 200th I started the Week by planning to go East Fife V Queens with my mate but this fell through so then best I could afford on my own was Shildon V Ascot in the Fa Vase. Then I got a call from my pal in Coventry asking for a hand moving house down there.

After winning some cash on the horses Wed I decided to abandon plans for Shildon and after consulting the Fixture List I noticed Banbury were at home and that the Ground was within walking distance of the station. The fare was £19.50 for the 29 Minute Journey (1 Adult 1 Child) although I reduced this with my Family Railcard, getting a 3rd off to £11.05 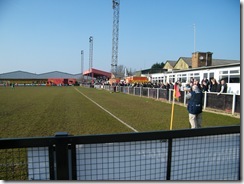 Me and the boy made our way to Banbury via the train from Coventry catching the 1425 which arrived at Banbury at 1454 the ground is directly beside the Station and you walk down along side the car park towards the floodlights, you wouldn’t know there was a ground there unless you knew it although you could here the PA as we approached. The players were coming out as we Arrived so it was perfect timing, Although there were no programmes left. The entrance itself doesn’t look much like and entrance but the main entrance is around the other side I believe 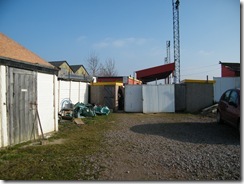 The game itself was a game of 2 half’s Banbury having the better of the 1st half taking the lead in the 13th Minute when Michael Hopkins Superb Solo effort running from the half way line before jinking past 2 players to slot home. 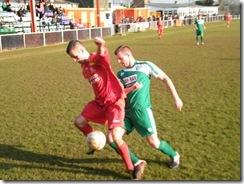 In the 2nd half it was mostly Bedworth as they pressed for an Equalizer which duly came in the 85th Minute When Tom Bates curled a free kick over the wall and into the net. Banbury were denied a Penalty in the final minutes as Chris Lait was brought down in the area but the ref didn’t give it was as stonewall penalty as your likely to see, but take nothing away the result was probably a fair result. 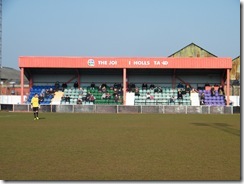 We left just before the end the Penalty incident was the last piece of action we saw as we made our way to the exit. We took the short walk to the station perfectly timing the walk as we landed on the platform as the train approached. to catch the 1654 back to Coventry. 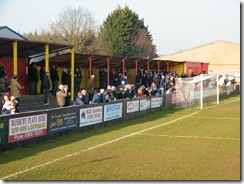 A great day out made a change by travelling on the train as I normally drive but when a ground is that close to the station it would have been wrong not to take the train. I managed to get a programme as during the second half I managed to use Twitter to ask if anyone had one. Luckily Banbury’s Press Guy was able to provide me with one at no cost which was great. At half time I also had a ratch around in there club shop and was able to get 5 programmes for a £1 managing to pick up a Newcastle one I needed 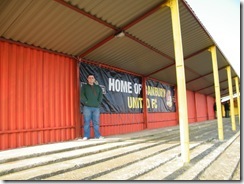