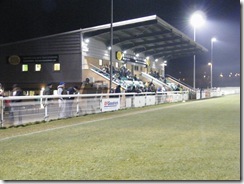 Nantwich Town Football Club is a semi-professional football club based in Nantwich, Cheshire, England. The club was founded in 1884 and is nicknamed The Dabbers. The club is currently a member of the Northern Premier League Premier Division, with home matches played at the Weaver Stadium. Nantwich Town won the FA Vase Final on 6 May 2006 a 3–1 win over Hillingdon Borough at St Andrews.

Nantwich followed up their FA Vase winning season of 2005–06 with another successful campaign in 2006–07 (their last at Jackson Avenue). Finishing 3rd in the North West Counties League Division One they were promoted to the Northern Premier League Division One South for the 2007–08 season and then gained a second consecutive promotion to the Northern Premier League Premier Division. The club plays at the Weaver Stadium at Kingsley Fields. The ground cost £4 million, and was opened in 2007 before the start of the 2007–08 season; previously the club had played at Jackson Avenue. The Baker Wynne & Wilson Stand is the main stand at the Weaver stadium and is situated to the south of the pitch. It seats around 300 people. It also contains bar facilities and also a snack bar. 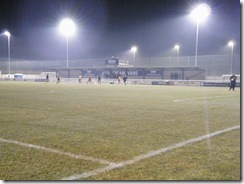 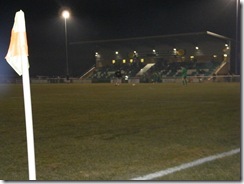 The Whitby Morrison Ice Cream Vans Stand is a low terrace situated to the north of the pitch at the Weaver Stadium. It can hold around 295 standing supporters. It is home to the more vocal of the Dabbers support At present both ends of the ground are flat and undeveloped

I made my Way from the Hotel at Kidsgrove along the A500 Arriving at 1920 parking up in the car park It was a bitterly cold night and I Very rarely took many photos. Nantwich were 1-0 down after 6 minutes when after a corner kick was taken and after goal mouth scrabble Sam Smith was first to react smashing home.

In the Side was a former Carlisle Player and another Carlisle lad like myself Jonny Brain who was playing in goals sadly his evening didn’t last long after he was sent off after 10 minutes, Jon is a Former Carlisle YTS who was signed up by Newcastle in 1999 and was then released in 2002 signing Non Contract terms back at Carlisle.Not playing a game eventually he signed for Port Vale making 59 appearance's before following Brian Horton to Macclesfield for 4 Years Making 125 appearance's. In 2010 he turned down a new Contract and opted to sign for Walsall in a higher league but he wasn’t successful only making 16 appearance’s and he was eventually released and signed for Nantwich becoming there regular goalkeeper and a constant top performer 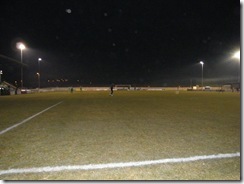 After the Game it was back down the A500 to Kidsgrove 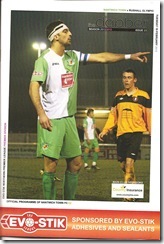