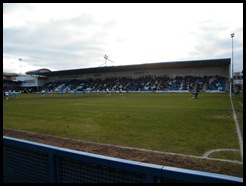 A.F.C. Telford United is an English football club based in Telford, Shropshire. The club participates in the Conference National, the fifth tier of English football. The club plays its home matches in Wellington, which forms part of the new town of Telford. Telford is one of the largest towns in England without a Football League club.
They were formed on 28 May 2004 by supporters of Telford United after it became clear that the club would cease to exist.The club's colours are black and white.
New Bucks Head is a stadium in Telford, England and the home of Conference National football club A.F.C. Telford United. It was originally built for Telford United to play at before they went bankrupt. The stadium is on the same site as the original Bucks Head, which had been home to Telford United and Wellington Town for over a century. The stadium was completed in 2003, and has a capacity of 6,300. It is covered on three out of four sides. The stadium lease and assets are currently held by Telford and Wrekin Council.
The stadium regularly hosts Wolverhampton Wanderers F.C. reserve fixtures.The Stadium has also been used for international football, hosting England U16's against Wales U16's in the Victory Shield. and more recently U19 Fixtures. 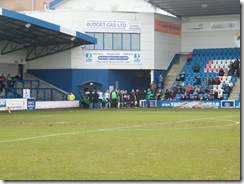 Having stayed over for the Week in Stoke we made the Journey down the A519/518 across from the M6 at Junction 15 having dropped the other half off at her Uncles in Telford I drove up to the ground parking up at nearby Regent street around 14:45 I entered the ground via the home Turnstiles behind the goals as you can move along the side 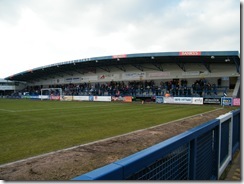 The game itself stated slow but soon came to life when Adam Cunnington’s flick-on was smashed home by Tommy Wright with 18 minutes gone. Ian Craney scored an equaliser from close range after Jake Reid had headed on Jay Smith’s free-kick in the 30th Minute. The Lambs regained the lead five minutes before half time when Wright headed home Tom Marshall’s cross from a free kick. In the Second Half Telford Equalized again when Phil Trainer headed home from a corner in the 73 Minute. But Tamworth re-took the lead in the 77th Minute when Wright completed his hat-trick nodding home after a goalmouth scrabble. Telford continued to Attack though and Reid fired them level yet again after the Tamworth keeper could only parry substitute Richard Peniket’s header in the 85 Minute. Telford Pressed on for a winner but a combination of the Keeper and the Woodwork kept them out and they missed out on a valuable 3 points instead having to settle for 1 in their fight against relegation. Highlights of the game can be found Here 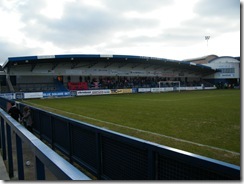 The Tamworth Side had Former England International Lee Hendrie in their side as well as Darren Byfield who have all played at higher levels, but Adam Cunnington Shone up front for the Lambs and at 6ft 3 will no doubt play at a higher level. For Telford recent signing Ian Crainey Looked a good signing and Loanee Richard Peniket from Fulham also did well in the short time he was on the field. 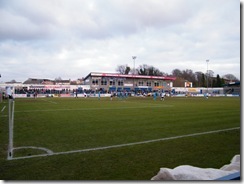 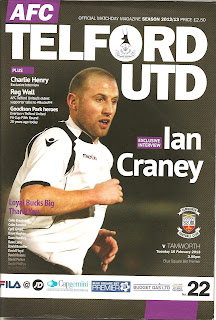