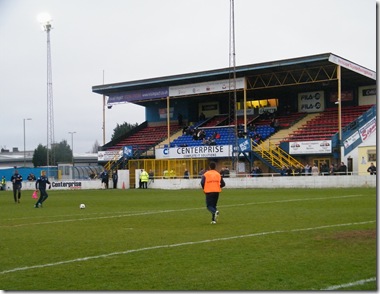 Basingstoke Town Football Club is an English football club based in Basingstoke, Hampshire. The club are currently members of the Conference South and play at the Camrose, named after their late benefactor, Lord Camrose. Their motto, 'Vestigia Nulla Retrorsum', means 'No stepping back'. The club was established in 1896 by a merger of Aldworth United and Basingstoke Albion
The club play at the Camrose, named after their late benefactor, Lord Camrose. The ground did have a capacity of 6,000 (however due to Health and safety regulations the current capacity is somewhere in the region of 3,000) Basingstoke boast a 650-seat main stand. Basingstoke Town unveiled plans to relocate to a new 5,000 capacity community stadium in December 2011 on land to the west of the Hilton Basingstoke hotel, that would be funded by the development of the club’s current Camrose home, with a view to move into their new home in time for the start of the 2014/15 season. 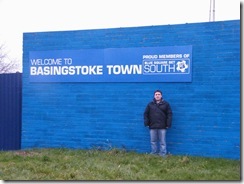 After making our way down from Carlisle to Newbury on Friday night we stayed at the Travelodge. Saturday morning we went over to Thatcham to Visit my old friend Pete and his family. We had the Choice from there between Maidenhead,Basingstoke and Salisbury. I choose Basingstoke having been the closest. We arrived at the ground once again bang on Kick off and took our seats in the main stand paying the extra £1 to transfer. 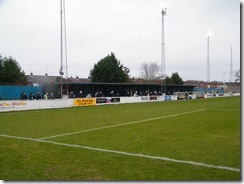 Basingstoke Town climbed out of the Blue Square Bet South relegation zone after beating Bath City. Basingstoke got off to the worst possible start, conceding after just 39 seconds when right back Dan Ball went past 2 players before pulling the ball back to Josh Low to Finish calmly. A few minutes later and the town keeper was forced to make another good save from Nichols after a neat turn and shot. Town got there first real chance in the 11th Minute when Stuart Lake released Delano Sam-Yorke down the left and Bath goalkeeper did well to prevent the ball reaching Tim Sills from his cross. In the 24th Minute an excellent run from right-back Dan Ball sees him skip past players before sliding in Josh Low. His shot was pushed wide by Ashley Bayes. Basingstoke Equalized just after when the Defender misjudges a bouncing ball and Sam-Yorke is allowed to turn in the area. His shot has enough on it to Slide under the keeper and into the net. In the 35th Min Bath should have been back ahead. Josh Low is in the clear and the ball clips the outside of the post on its way wide. At half time the Score was 1-1 and Bath were slightly the better side. 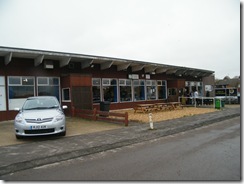 At Half time we grabbed a hot dog from the trailer and at £3 slightly more like League Prices not the Non league I was expecting. before going to the bar outside the ground to watch a bit of Soccer Saturday on Sky Sports No surprise to find my club Carlisle getting comfortably tanked by Swindon 2-0 but am told it could and should have been more eventually losing 4-0 at FT.
There was lots of Half chances in the second half as Basingstoke went for the win clearly the better side in the second half the goal eventually came on 76 minutes Wes Daly released Simon Dunn down the left. His pull-back hits a Bath defender, the ball then breaks for Sam-Yorke, who smashes the ball home for 2-1 . 5 minutes later and it should be 3-1 a neat one two between Holder-Spooner and Delano Sam-Yorke and Holder-Spooner managed to get his shot on target but the keepers save is just past the outreach of Tim Sills. Basingstoke held on for the win which took them out of the bottom 3. Sam-Yorke scoring his fifth an sixth goals in two games. 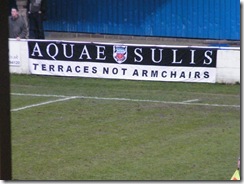 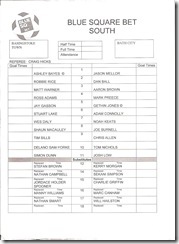 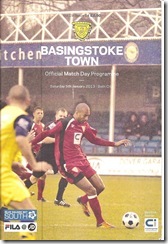