Newcastle Town F.C. are an English football club based in Newcastle-under-Lyme, Staffordshire. They play in the Northern Premier League First Division South. The club was formed as a Sunday league club in 1964. The club as it is now emerged in 1986 following the merger of Parkway Clayton and Newcastle Town, after the original Newcastle Town ran into financial difficulties, and a year after initial merger talks had broken down.

The club play at the The Aspire Stadium Formerly Known as Lyme Valley Stadium, which has a capacity of 4,000. It is notable for having a velodrome that is used for track cycling running around the pitch. It has covered accommodation for 1,000 with 300 seats. The stadium is located in a large parkland area. There is a clubhouse with the 300 seated stand on one side of the pitch behind the velodrome. On the opposite side is a larger covered stand which has a small amount of terracing. At each end of the pitch are the curved bends of the velodrome. Stoke City used to play their reserve matches at Lyme Valley, while the stadium regularly holds pre-season friendlies with local Football League clubs Stoke City, Port Vale and Crewe Alexandra. 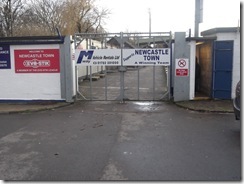 My Original Plan was to Visit Belper town or Matlock but after Leaving Carlisle Rather late my Plans had to change to Either Crewe V Carlisle or Newcastle Town. Since I had to be in Shepshed by 6 Newcastle town was deamed the safest giving the likely traffic around Crewe and cheapest to add. 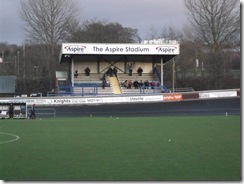 I arrived bang on Kick off and took my seat in the main stand, but it was very windy and chilly so I decided to move round to the opposite side for a bit more protection from the elements. The game it self wasn’t up to that much but the games only goal came courtesy of Rob Stevenson in the 51st minute. I actually missed the goal as I was still in the bar. Newcastle hit the post during the game but could not find a reply in the end the match grinded out. The weather wasn’t great and the pitch wasn’t in the best condition 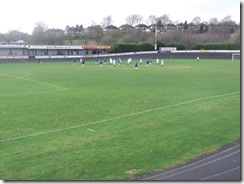 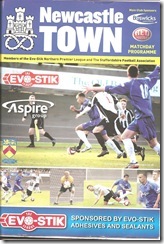