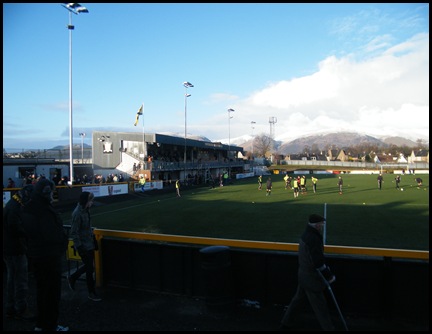 Alloa Athletic Football Club are a Scottish football team based in Alloa, Clackmannanshire. They are members of the Scottish Football League and currently play in the Second Division.

They are nicknamed 'The Wasps' for their kit's distinctive black and gold hoops and 'The Hornets' after the club adopted a cartoon Hornet for their club badge in 2010. Their home ground is currently Recreation Park, also known as The Recs. The ground has recently undergone a number of changes with the removal of the Hilton Road Terrace and the laying of a new artificial playing surface in the summer of 2007. A new perimeter wall was then built at the Clackmannan Road end of the ground and a new 519 seated stand for away supporters was opened in October 2008. They are managed by Paul Hartley. 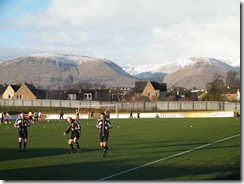 Alloa Athletic have played at Recreation Park since 1895. A wooden main stand was built during the 1920s. Around 1950, a terracing cover was built on the Hilton Road Side. A record attendance of 15,467 was set by a 1954–55 Scottish Cup tie against Celtic. Floodlights were installed in 1979 and a new main stand was opened in 1991. The new main stand cost £350,000, most of which was provided by the Football Trust. By the mid 1990s, when the ground was being used for Rangers reserve team matches, capacity had been restricted to just over 4,000. An artificial surface was installed at the ground before the 2007-08 season. A seated stand was constructed on the Hilton Road Side in 2008. 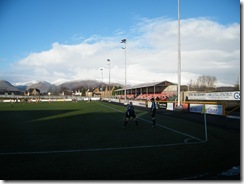 My original plan was to spend the weekend in Coventry at my friends house then we would travel to Crawley on the Saturday unfortunately the weather put paid to that so I then made a list of some non League games I would do instead by Friday the weather was looking bleaker so I decided not to travel. In the end I was right as only the Telford game went ahead from my list and I am aiming for that on Feb 16th.

After a few phone calls me and Adam (twitter.com/Adam92lg) decided to travel to Stirling V Annan with the option of Alloa or Airdrie if they were called off. True enough at 1030 the match was called off and Stirling Albion’s twitter confirmed that Alloa had a 3G pitch. So we set off up the M74,M80, and M876 after stopping at Hamilton Services to replenish the water in the windscreen washer tank. We arrived at Stirling around 1400 and took a few photos before heading to Alloa. Parking up in the small car park next to KFC. 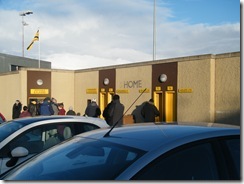 The game itself was end to end with both teams attacking each other from the off. As it was too cold to write notes down you can read the report here. The ground itself has 2 main stands 1 on either side with the open railway end terrace behind the goal at one end and a small cover terrace at the other 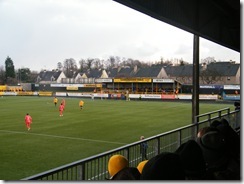 After the game we made our way back down to Cumbria once again having to stop off to replenish the washer tank at Hamilton, there is more rock salt on my car than on the M74 a trip to the car wash is in order for tomorrow. 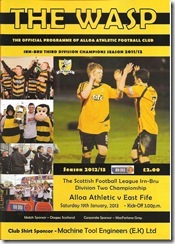 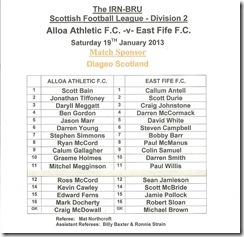