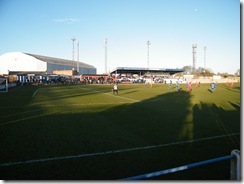 Wow well where do I start with this one. Well the match kicked off and from the Kick off Penrith Scored Whitley Bay gave away a free kick and when the ball was played into the goalmouth, Andrew Murray-Jones slotted the ball home from a few yards out after some slack defending from the Bay. It didn’t take long for the Bay to get back on Level terms just 9 minutes into the game when Fawcett whipped in a cross from the left and Lee Kerr rose highest to flick the ball into the Net. In the 15th minute Whitley went ahead when Fairley’s excellent through ball reached Ash Davis who slotted the ball past the oncoming keeper. A few moments later Bay’s Davies tested the keeper with a powerful shot but the Keeper was able to tip it over the bar. Moments after that another through ball and another Davis shot but this time the keeper made a smart save. Brooking then fired a shot wide as the Home side looked to score. Penrith Equalized in the 36th Minute when Scott Allison superbly took control of the ball 20 yards out and was able to quickly turn and fire home.

A minute later, when the ball went out of play near the visitors’ dugout, Penrith manager Brian Williams was dismissed from the dugout not sure what for as I was over the other side but I believe he kicked the ball away from the defender who was trying to take a throw in, which resulted in an altercation between the two. Moments later Will Paul lost control of the ball on the touchline after a bad touch and when going for a 50/50 ball went slightly over the top of the ball catching the defender. the referee after a bit of thought dismissed the player. Now I must say the incident happened right in front of me and I thought it was harsh, It was a one footed tackle but it was off the floor. Both players went it for the ball hard and the Bay defender came out worse. The thing about non-league level is you can hear what the players are saying to the ref and you could quite clearly hear the Whitley Bay players asking for the ref to send him off (especially the number 5 for Bay) so I believe this may have had an effect on the ref, but he was well placed to view the incident and only he can answer that one. There was a bit of a melly between the two teams and 2 players were booked as well. When Play resumed Bay went on the attack and where back in front when another good through ball resulted in James Fairley chipping the keeper to score on 44 Minutes.

After the restart with only 10 men you would have expected Penrith to cave in but they kept working hard and were rewarded when on 51 Minutes they Equalized again after a solid bit of Pressure. A cross from the left found Scott Allison who was able to turn and fire past the keeper for 3-3. On 55 minutes it was 4-3 when a neat bit of interplay between the Substitute Chow and Brooking resulting in Brad Brooking firing home. Monuments later it was 5-3 when a through ball from Pounder found Paul Chow who took it passed a defender before clinically finishing into the opposite corner of the net. On 67 Minutes Fawcett’s Cross from the right was headed home at the far post for 6-3 by Paul Chow and on 81 Minutes an almost identical cross was again Headed home by Paul Chow to complete his hat-trick and make it 7-3. Still the match wasn’t over as the Whitley Bay players were Queuing up to score and on 85 Minutes Fawcett was tripped in the area and Whitley were awarded a penalty Kerr took the spot kick but it was well saved by Jamieson. A few moments later another penalty when substitute Michael McMullen was brought down by defender John Jardine. Lee Paul Scroggins took the kick and his shot went in off the bar for 8-3

Penrith Didn’t give Whitley an easy time and the score line doesn’t do Penrith Justice but it could easily have been double figures in the second half as Penrith began to tire. The sending off had a big effect on the game and the goals conceded were as a result of the gaps in the defence left by the missing defender. 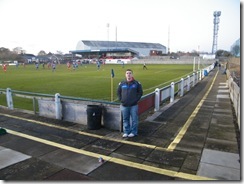 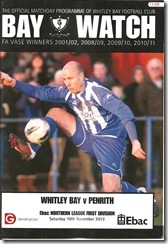 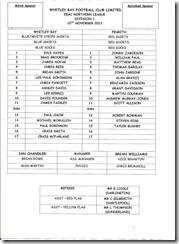