Hamburger Sport-Verein usually referred to as HSV in Germany and Hamburg in international parlance, is a German multi-sport club based in Hamburg, its largest branch being its football department. The football team is one of the country's oldest, most well known, and best performing clubs, with the unique distinction of having played continuously in top tier of the German football league system since the end of World War I; the team has never been relegated from any top-flight league and is the only team that has always played in the Bundesliga since its foundation in 1963. 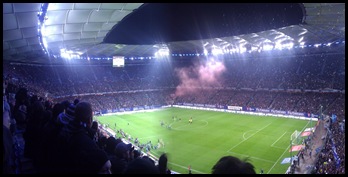 Hamburg plays its home games in the Volksparkstadion, which is currently called the Imtech Arena through a sponsorship deal. Built on the site of the original Volksparkstadion, opened in 1953, the current stadium was opened in 2000, and has a capacity of 57,000 – approximately 47,000 seats with another 10,000 spectators standing. The first Volksparkstadion had been a venue for the 1974 FIFA World Cup and UEFA Euro 1988. The Volksparkstadion is a UEFA category one stadium, which certifies it to host UEFA Cup and UEFA Champions League finals. The stadium was the site of four group matches and a quarter-final in the past 2006 FIFA World Cup, hosted by Germany, and was known as FIFA World Cup Stadium Hamburg during the event. It was also the venue for the 2010 UEFA Europa League Final.

So my Journey began once again on a Friday Night down to East Midlands then onto Tile hill after I had dropped off my Cargo. First thing Saturday Morning a pal of mine drove me up to the Airport for my 0720 flight to Munich. why Munich you ask ? well Originally I had booked to Hamburg but Lufthansa decided to change the flight for some reason so I had to Fly to Munich then Back to Hamburg I caught the 0720 to Munich and it Arrived just after 10 in Germany I was then Super fast back on the 1105 to Hamburg. I landed in Hamburg just after 12 and it was 1230 before I was through the Customs. I boarded the Hamburg S-Bahn on Line S1 45 min’s later I was at Reeperbahn from there I walked to short walk to by Hotel I Met up with the rest of the Lads in the London Bar to watch the Man U V Arsenal game when that finished we then Boarded Line S3 to Stellingen upon exited the Station we walked under the tracks though a tunnel, at the end of the tunnel was a few stall’s selling scarfs and Beer. by this time it was heaving it down with rain so we had a few beers and Sausages from a near by stall before boarding a bus up towards the ground. we visited a near by bar called Soccerdance had a few more beers before walking up to the ground. I didn’t take any notes or anything so the Match report can be read here courtesy of Goal.com but Bayern Munich cruised to victory against Hamburg with a 3-0 victory courtesy of Bastian Schweinsteiger, Thomas Mueller and Toni Kroos. Hamburg played reasonably well, but the hosts were simply no match for the firepower that the league leaders had to offer, and once they went down a recovery never looked likely.
The difference in the Stadium in Germany was that you could drink beer and watch the game in your seat this was the first time I had encountered this and there was no trouble at all. Also they had a Terracing area behind the goals (which most English clubs are not allowed in the top flight). 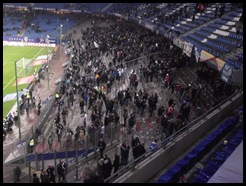 After the Game you could still wait around and have a few drinks they were in no rush to get rid of you again something in England is that the Stewards want you out the stadium and away home sharpish once the games have finish. so we had another round of drinks and waited till the Queue’s for the buses had gone down 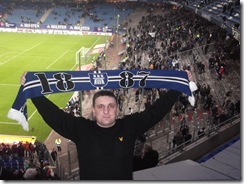 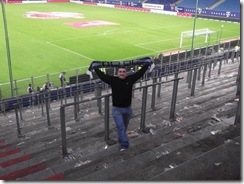 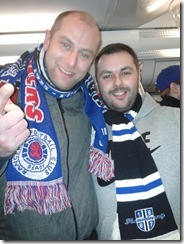 We were back in the Reeperbahn before long and drank the night away to Celebrate Our friend Rob’s final few few weeks as a Single man.