Burscough Football Club is an English football club based in Burscough, Lancashire. The club are members of the Northern Premier League Division One North. Their home ground is Victoria Park, Mart Lane, in Burscough. Due to the local Burscough postcode being L40, fans have recently started using the phrase "We Are L40" when referencing their support of the club.  The first Burscough Association Football Club was formed in 1880, playing in the Liverpool and District League football before folding in 1900. In 1905 Burscough Rangers were founded and moved to the present Mart Lane ground in 1908. They established many of the traditions carried on by the current club, playing in green and known as the Linnets. In the 1920s they had success winning the Liverpool County Combination Championship three times. In 1926 Rangers purchased a grandstand from Everton and erected it on Victoria Park. The following year they joined the Lancashire Combination but never experienced the same level of success and began to run into financial difficulties, finally folding in 1935. Following World War II the present Burscough club was founded in 1946, starting life in the Liverpool County Combination

The club play their home games at Victoria Park, in Burscough which has a capacity of 3,054, with a 250-seat grandstand. Opposite the grand stand is a sheltered terrace. At the Crabtree Lane end of the ground is another sheltered terrace, with a smoking area between these two shelters. These two stands can provide cover for up to 1,000 standing occupants. The Mart Lane end of the ground has the main turnstiles. There is a canteen and privately owned clubhouse named "The Barons" situated in the ground. The ground's record attendance is 4,798 for an FA Cup game against Wigan Athletic in 1950–51 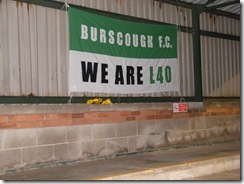 I made my way up from Birchwood to Junction 27 of the M6 taking the A5209 down towards Burscough if you ever go watch out for the Speed Camera at the Bottom on the hill on the way into Parbold (No it didn’t get me ). The ground is tucked in behind the Tesco's just off the A59 I parked up on a side street and entered the turnstiles. Burscough like a few clubs offer Season ticket holders from other clubs half price entry so I took advantage and entered for £4. I went into the club shop to Browse the programme's and whilst there I left a few spare Carlisle programmes and they were nice enough to give me a pen. I had a good conversation with the guy in there and met a few other nice folk before the match kicked off

The home side had plenty of advantage in the first half, but the visitor’s resolute defence kept them at bay, whilst the best chances of the half fell to the Rams. As early as the fourth minute, a well-weighted pass from Jon Robinson fed Phil Dean on the left, and as he strode goal-wards, he lashed his effort into the side netting. Ian Flannery then leapt highest to head the ball goal-wards from a corner, but it landed straight at the keeper. Robinson fed Grant Spencer, but his shot was too weak, before Spencer turned provider with a cross that Lee Gaskell lifted over the bar. The home side did look dangerous on a couple of occasions. It took a desperate last-ditch tackle from Danny Warrender to deny Caddick, before the same forward was denied when his goal-bound shot deflected away for a corner.
Spencer fired a free-kick into the side netting before the visitors finally made the breakthrough in first half time added on.
A pass out to the left saw Dean put on a turn of pace as he raced past his marker down to the by-line. His inch perfect cross was converted from close range by Robinson to send the Rams in at half-time with their noses in front.
The home side came out for the second period in determined mood. Mayers was inches away with a drive from the edge of the box, before the game turned within a matter of seconds in the 48th minute.
In a melee in the Rams area, keeper Grant Shenton dived bravely in amongst a forest of feet to gather the ball. As he cleared his lines, the ball found Robinson at the other end of the field, and he nodded on to Gaskell who netted at the second attempt.
Two minutes later it was so nearly three. Warrender raced down the right before planting a perfect cross for Robinson, but his goal-bound effort was scrambled away for a corner. Just after that Mark Ayres header fell perfectly for Gaskell, but he also had to look on as the home side cleared his close range shot off the line.
The game moved from end to end, with both sides creating chances. The Rams also had to clear their lines in a goalmouth scramble, and Duff tested Shenton with a 20 yard effort whilst Caddick saw his long range effort clear the bar by inches.
At the other end, a low Dean cross was just too powerful for Spencer at the far post, and Spencer, himself, was inches away with a free-kick.
The best save of the game came in the dying minutes when a lofted ball into the Rams area fell invitingly at the far post, but Shenton was equal to it as he pulled off a superb close range save to preserve the two goal lead.

I headed home after the final whistle arriving home by 2315. I met some nice people and enjoyed the game. The pictures aren’t great as I am still learning to shoot photos in the dark 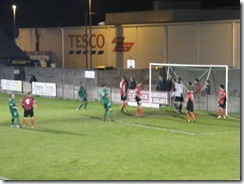