Hibernian Football Club (/hɨˈbɜrniən/ hə-ber-ni-ən) are a Scottish professional football club based in Leith, in the north of Edinburgh. They are one of two Scottish Premier League clubs in the city, the other being their Edinburgh derby rivals,Hearts. Hibernian were founded in 1875 by Irish immigrants, but support for the club is now based on geography rather than ethnicity or religion. The Irish heritage of Hibernian is still reflected, however, in its name, colours and badge.The name of the club is usually shortened to Hibs. The team are also called The Hibees (pronounced /ˈhaɪbiːz/ hy-beez) and The Cabbage,a shortening of the rhyming slang for Hibs of "Cabbage and Ribs", by fans of the club, who are themselves also known as Hibbies. Home matches are played at the Easter Road stadium, which the club have played at since 1893, when the club also joined the Scottish Football League.Hibernian have played in the Scottish Premier League since 1999, one year after the breakaway league was founded. Easter Road is a football stadium located in the Leith area of Edinburgh, Scotland, which is the home ground of Scottish Premier League club Hibernian (Hibs). The stadium currently has an all-seated capacity of 20,421, which makes it the fifth-largest football stadium in Scotland. Easter Road is also known by Hibs fans as "The Holy Ground" or "The Leith San Siro". The venue has also been used to stage international matches, Scottish League Cup semi-finals and was briefly the home ground of the Edinburgh professional rugby union team. 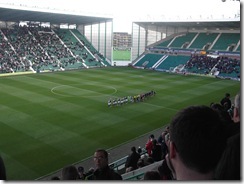 This was to be a 3rd Visit to Easter Road I previously popped past the ground on my way to a job in Edinburgh in 2010 and got some pictures while they were building the new east stand, and then again in 2011 for a Preseason Friendly against Barnsley where it was Postponed an hour before kick off Meaning I had to Dash to Livingston Instead.

My day started out from Carlisle at around 1130 making the drive up the M74 and A702 towards Edinburgh. It was a planned trip much earlier in the Summer as it was for a friend of mine’s stag do but a few of us had decided to start the day with a visit to Easter Road. There were 2 former Carlisle Players in the Hibs side as Ben Williams started in goal for Hibs and Tom Taiwo made the Bench. After checking in at my hotel which just happened to be round the corner from Easter road I walked round for 2 o clock meeting me pals in a Bar called the office just on the Corner of Easter Road. We made our way to the ground for 2.40 and entered through the Cash turnstiles. Taking our seats just in time for Kick off. 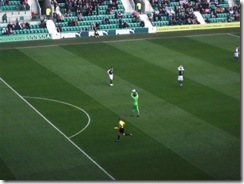 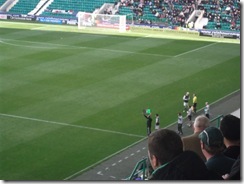 HIbs went top if the league (for 24hrs at least) with a comfortable win against the bottom side Dundee. Nothing much happened for the first 20 minutes but then Dundee midfielder McAlister had an opportunity when he latched onto a loose ball, His left foot drive was destined for the bottom corner only for Williams to dive low to his left to tip the ball clear of goal. The opener came after 29 minutes When midfielder Cairney burst down the left and his clipped cross into the penalty box was met by the head of Doyle who nodded home his fourth goal of the season Both Wotherspoon and Griffiths came close to adding to the home tally before the whistle blew for half time. However, five minutes into the second half the home advantage was doubled from the penalty spot. Cairney was tripped by former Hibs player Kevin McBride and Griffiths slammed the ball home from 12 yards. The impressive Cairney had a golden opportunity to notch for Hibs when he ran on to a searching pass from Wotherspoon, rounded the keeper and looked certain to score, but Iain Davidson managed to get back and clear the ball off the line. Number three did come for the home side after 74 minutes and it was Wotherspoon who came in from the right to collect a Tim Clancy pass and fired a low left-foot shot beyond veteran Dens Park keeper Douglas into the corner of the goal. Tom Taiwo made his Debut for the Hibees shortly after that as they ran out comfortable winners. 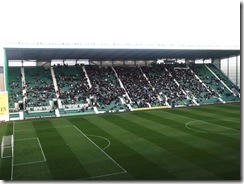 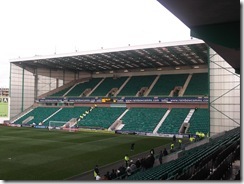 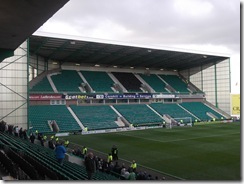 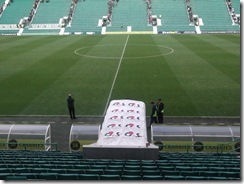 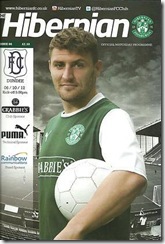