Spennymoor Town F.C. is an English football club based in Spennymoor, England, and playing in the Northern League Division Onein the English football league system. The club began playing in the Northern League in 1931–32 as Evenwood Town, reaching the 1st round of the FA Cup in the 1956–57 season. In 2005, the club changed their name to Spennymoor Town. The club's current fan base consists entirely of supporters of Spennymoor United, who folded in 2005. The club plays its home matches at The Brewery Field and play in black & white strips. Their nickname is "The Moors" and local rivals are considered to be Bishop Auckland. The club tried to change its name to Spennymoor United before the 2006–07 season however, the FA rejected the proposal. The fans hope one day to get this name back. Despite winning the league in three consecutive seasons (2009-10, 2010-11, 2011-12) they did not apply to be promoted for any of their victories.
We made our way to Spennymoor from Carlisle over the A66 past the remains of Barnard Castle and then past the Stunning Ruby Castle

We Arrived at the ground around 2pm and parked up just over the road from the ground entering the ground at around 2.15 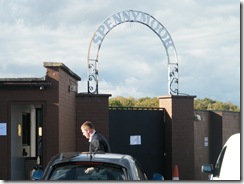 Spennymoor’s 100 per cent record in the EBAC Northern League finally ended when they were held to a 1-1 draw by nine man Celtic Nation. After an even first half, Celtic took the lead when Michael Reed ran through and slotted the ball past Moors keeper, but Moors levelled when Mark Davison headed in a cross by Craig Ruddy Celtic Nation were reduced to nine men in the closing minutes. David Lynn was shown his second yellow, and then James Earl was shown a straight red for a foul on Richardson. Spennymoor should have had a penalty in stoppage time when Steve Richardson was brought down in the area, but the ref booked him for diving instead. 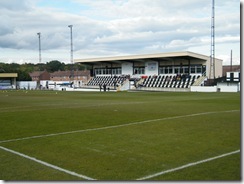 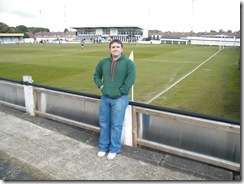 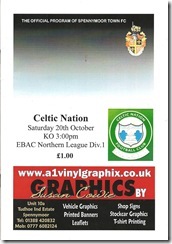 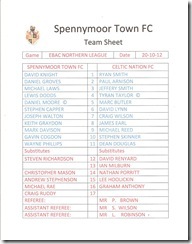