Dunfermline Athletic Football Club are a Scottish football team based in Dunfermline, Fife, commonly known as just Dunfermline. They currently compete in the Scottish First Division. They play at East End Park and are nicknamed The Pars. In the STV television detective drama Taggart, the writer and Dunfermline fan, Stephen Hepburn used the names of the 1968 Scottish cup winning side for the characters in a 2003 episode
East End Park is a football stadium situated in Dunfermline, Fife, Scotland with a seating capacity of 11,380. The stadium plays host to the home matches of Scottish Premier League side, Dunfermline Athletic F.C. It currently comprises fourstands: East Stand, Main Stand, SGM Stand(Grassy) and the Norrie McCathie. The stadium is all seater and has undersoil heating. 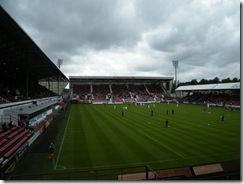 Me and my 2 boys set off on the 1103 from Carlisle bound for Edinburgh we got off at the Main station and went over to the shopping centre next door for some lunch at McDonald's before catching the 1319 to Dunfermline town station arriving at 1350 the ground is in between the towns two stations Dunfermline town and Dunfermline Queen Margaret so you could use either. Whilst on the train we went passed Murryfield home of the Scottish Rugby and then Edinburgh Airport one of my boys shouted “look dad a plane has crashed “ as I looked I could see an old Abandoned plane by the side of the track. We then went over the Forth Rail bridge which runs parallel with the Road bridge 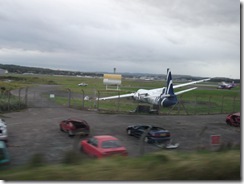 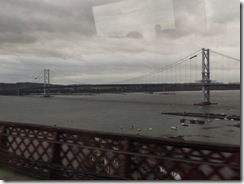 A short walk through the park and then along a few streets and we arrived. we purchased our tickets for the away end then made our way to the club shop buying a programme and a team sheet. We then went next door to the Aldi despite my youngest boys protests (as he wanted to go home). We bought some drinks and biscuits for the match. we took our seats in the away and the match kicked off 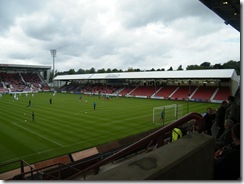 The full-blooded Fife derby kicked off with Dunfermline’s number 11 Falkingham’s late lunge at Eddie Malone which could have merited a straight red had it not been 30 seconds from the start. Malone later gave the Dunfermline midfield player a fat lip with a cheeky elbow unseen by the ref. Then, when Andy Dowie body-checked Grant Anderson, the referee pointed at the spot. Brian Graham’s penalty was poor, but Paul Gallagher beat the ball away to his right. In the first half Dunfermline were by far the better side and they took the lead When Colin Wilson stumbled in his own box, which allowed Dunfermline's Wallace to thump a low shot into the net to give the home side the lead The home supporters became very vocal then as they sense the win for their side 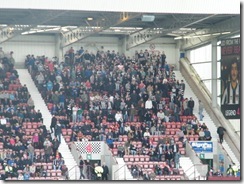 Shortly after that the home side doubled their lead Cardle providing the cross for the little number 11 Falkingham to head home and give the home side a 2 goal advantage. Player-manager Grant Murray came on for Raith in the second half and the away side looked better they got a goal back from a free kick now I must say I can see why Pars manager Jim Jefferies was so upset. Shortly before the the free kick Brian Graham was adjudged to have fouled Callum Morris when in fact he hadn’t and Dunfermline we awarded a free kick. A minute later and this time Joe Cardle was adjudged to have fouled Grant Anderson (which was soft)and Raith were awarded a free kick from that free kicked Brian Graham rose to head home and give the Raith fans some hope Jim Jefferies was Livid and you can understand why both decisions were wrong all I can assume is that he tried to make up for the mistake for the first free kick Jefferies received a talking to from the ref. Dunfermline restored there 2 goal advantage 5 min’s later a cross by Geggan and a header by Barrowman found the net to make it 3-1 and there it stayed that third goal took the wind out of Raith and they very rarely threatened after that.
After the game we walked  round the Stadium and were able to get back in on the side which enabled me to get a good picture of the stand although it would have been slightly better had a got a photo when it was packed with Raith Fans. we then walked back through the park and onto the train home this time changing at Haymarket for a quick connection back down to Carlisle 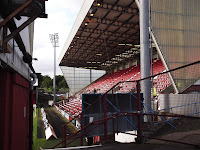 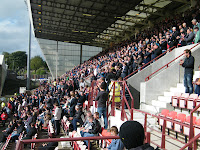 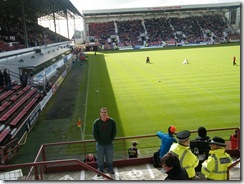 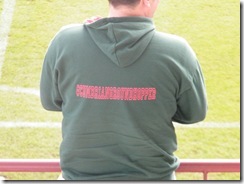 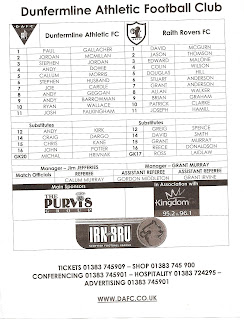 My New Hoody made an Appearance for the First time 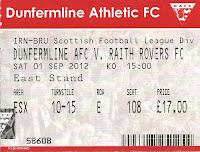 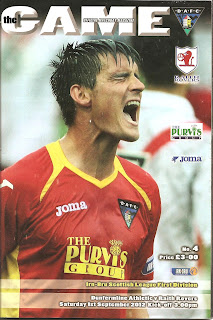