Valenciennes is a commune in the Nord department in northern France. It lies on the Scheldt (French: Escaut) river. Although the city and region had seen a steady decline between 1975 and 1990, it has since rebounded. The 1999 census recorded that the population of the commune of Valenciennes was 41,278, and that of the metropolitan area was 399,677. Valenciennes Football Club commonly known as Valenciennes or USVA) is a French association football club based in Valenciennes. The club was founded in 1913 and currently play in Ligue 1, the top level of French football. Valenciennes plays its home matches at the recently-built Stade du Hainaut located within the city. 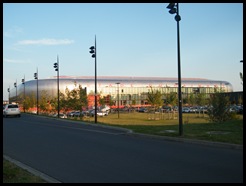 Stade du Hainaut is a multi-use stadium in Valenciennes, France. It is used mostly for football matches and hosts the home matches of Valenciennes FC. It has replaced the Stade Nungesser as VAFC's home stadium. The stadium has a capacity of 25,000 spectators for football matches, but its capacity can be extended to 35,000 for concerts. The stadium was constructed at a total cost of 75 million euros. It contains 2,600 club seats and 16 luxury boxes. It has two giant video screens, each 48 square meters in size. Its roof contains 1,800 tons of steel.

My Journey began on Friday night around 18:00 as I left Carlisle for East Midlands Airport with a delivery after dropping off at the Cargo centre I was onto the M69 and down towards Coventry for my Overnight Stay arriving around 23:00. Saturday morning and I was up for the 07:40 London Midland train to Euston a bargain at £21 compare to the £43.60 on the faster Virgin Trains. (1hr 20min’s compared to 2hrs on London Midland) Unfortunately the ticket office at Tile hill was closed meaning I had to buy a ticket on the train. As the Guard came through I tried to use my Visa but it wouldn’t work so I was kicked off at Northampton and told to go buy a ticket before re-boarding. The train stopped at Northampton for 10 min’s while they coupled it together with another another train so I was able to buy a ticket from the ticket office with my Visa. So why it did not work on the train am not sure? I arrived into Euston at 0927 and made the short walk down the road to St Pancreas 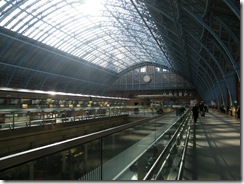 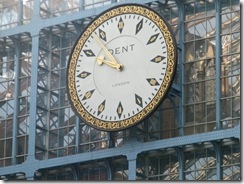 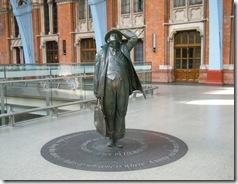 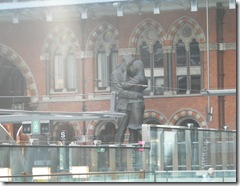 My Eurostar wasn’t due to leave till 1057 so I had enough time to wander round take a few pictures and buy a paper and a sandwich for the journey I had printed my tickets at home so I had to scan the barcode at the Entry gate and after going through an Airport style check in and showing my passport to the French border police I entered into a lounge where I had about half hour to wait. 15 mins before the train is due to leave they call the platform and the entire lounge heads for the escalators. It took a while to board as I was in coach 1 and it was full with every seat taken. luckily I had the seat next to the window and got a good view of the Essex countryside. Within no time at all I was into the tunnel the train seamed to slow down through the tunnel and I came out the other end at Calais and very shortly I arrived into Lille around 13:30 French time. 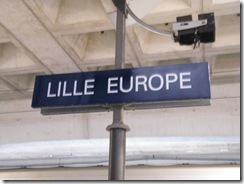 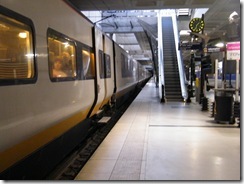 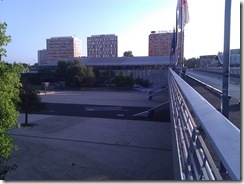 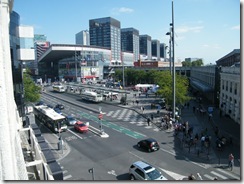 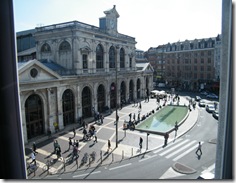 I then got the underground tram system up to catons where Lille’s new Stadium is it was 1.20 Euros each way and you have to stamp your ticket at the machines before you board the underground 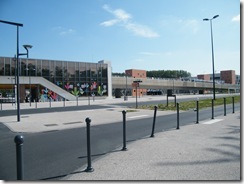 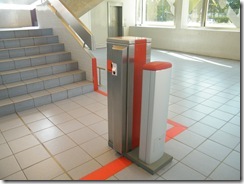 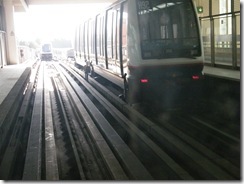 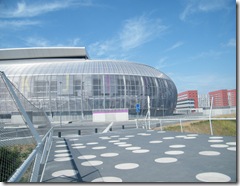 After a 20 mins ride of the underground I arrived at Cantons 20 mins walk from there I arrived at the Ground you can see photos of the stadium Here the security guard wouldn’t let me inside the ground so all the photos are from the outside. the stadium is open but is still not finished by the looks of things lots of builders and other people kicking about. After that I walked back to the underground and got back into Lille centre I had a wander round the shops in Lille town centre before going for the 1635 SCNF train to Valenciennes. My ticket was around 18 Euros for a 40 min’s journey the train was a double decker train again you have to validate your ticket via a machine before boarding the train. I sat on the top deck the conductors were quick to check my tickets after leaving Lille and there was a bunch of them rather than just one in England . 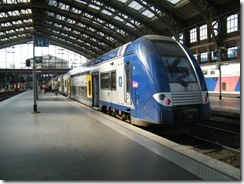 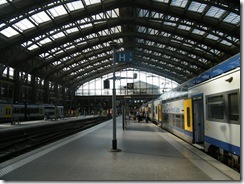 I was In Valenciennes by 1715 after a 30 min walk I found a pub near the ground decked out in Valenciennes scarfs and posters and I had a couple of beers called Leffe. I grabbed a programme from the bar which was free. I was in there for an hour or so whilst the English results were coming in looking for my beloved Carlisle (2-2 against Swindon) . About 7.15pm I wandered up and got a Stella from a stall outside a pub further up the road before taking a few pictures of the old ground’s turnstiles 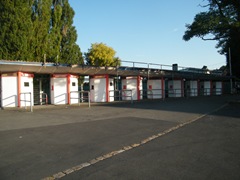 After finishing my beer I walked down the road that leads to the ground I walked right round to the other side of the ground and back again buying a scarf at the Club shop/Stall. I entered the ground with my ticket which I had Printed at Home. I purchased a Food Card and topped it up with 10 Euro so that I could purchase a Sandwich and a drink at the food stalls 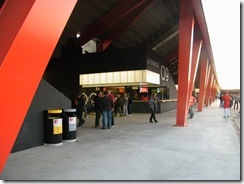 I then sat in my seat and watched the game I am not going to write a report as the game was a boring 0-0 draw and was short of chances to be fair. You can watch Highlights Here Courtesy of footylounge.com. 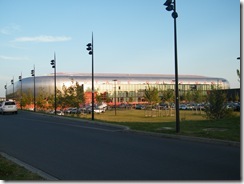 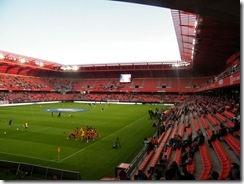 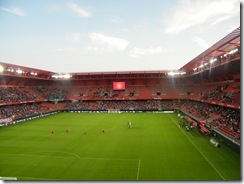 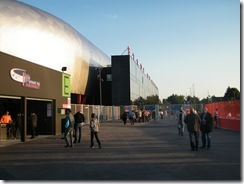 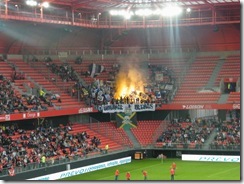 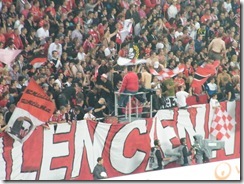 After the game I made my way into the town centre I had a quick drink of Leffe at the local bar before boarding the 2247 back to Lille I met up with some Ipswich fans on the train as well as a Bulgarian who wanted to know if Berbatov had scored for Fulham as he was a big fan ( He Had Twice), so the Journey back was good as I was able to have a proper conversation with someone English as my French wasn’t particularly great. Arriving back at Lille I had a few drinks in the local bar next to the station before retiring to my room for the evening. I caught the First Eurostar back to London the following morning at 0930 and was Back in London by 0957 English time. I was flirting with the Idea of going Wolves V Leicester on the Sunday but I decided against it as I was only back in Coventry for 1230 and it was £25 to get in. 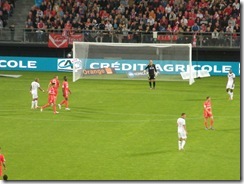 I Enjoyed the adventure but could have done with a companion really for the journey. I Struggled a bit with the language my French is basic in Lille it was ok but Valenciennes was slightly harder. 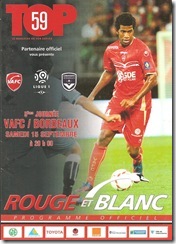 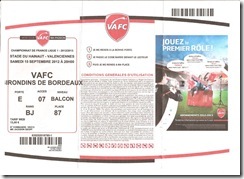