Stenhousemuir is a town in the Central Lowlands of Scotland. It lies in the Forth Valley within the Falkirk council area of Scotland. The town is 2.0 miles north-northwest of Falkirk and directly adjoins to Larbert in the west. The club currently plays in the Scottish Second Division. Through much of its history the team has competed in the lower leagues of Scottish football, spending the 2006–07 season in the Third Division. In 2008–09, despite earning 4th place, the club won the promotion play-offs and returned to the Scottish Second Division. In September 2009, Stenhousemuir Football Club, Ltd. was re-registered as a Community Interest Company.  Ochilview Park is a football stadium in Stenhousemuir in central Scotland, which is the home ground of Scottish Second Division club, Stenhousemuir who currently share it with local rivals East Stirlingshire. The stadium has a capacity of 3,776 with 626 seated. The stadium was opened in 1890 and has been the home of Stenhousemuir since. It has also played host to the home games of other nearby clubs including Stirling Albion and Falkirk whilst their new stadiums were under construction. The record attendance of 12,500 was set during a Scottish Cup quarter final match against East Fife in March 1950. Apart from the new main stand, only one side of the ground is usually in use for spectators, this being the terracing at the Tryst Road end (west). In season 2004–05, a new roof was installed here, constructed by club volunteers. The former grass banking at the east end of Ochilview was removed some years ago, and the area has since been flattened and replaced with artificial pitches for community use. Ochilview Park today has a total capacity of 3,776. Ochilview boasts a FIFA approved two star synthetic surface
Having visited Stenhousemuir on the 15th Jan 2010 whilst I was in Glasgow on a medical and again on 28th July 2010 when Carlisle were at a Pre Season friendly V’s Falkirk this was my first visit to Stenhousemuir for an actual match.
Me and my eldest son Dan left Carlisle on the 1147 to Glasgow and after a short walk over to Queen Street we boarded to 1348 Scotrail Service to Larbert. The station seamed to be unmanned although it normally is manned must have been due to staff shortages, Which meant the stairs and bridge were closed to we exited out the back door and used the road bridge back over the railway and walked down towards the ground 20 min’s later and we were there. 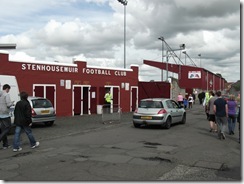 We entered the Stadium via the turnstiles and entered the main stand the price was £13 and £8 for the boy. I had originally thought the boy would be free but I think you had to register him as a season ticket holder to gain free entry. We took our seats towards the left side of the stand but as the game kicked off we decided to move over to the other end as most of the Clubs junior teams sat down in and around us. add to that the guy with the drum decided to sit behind us too. 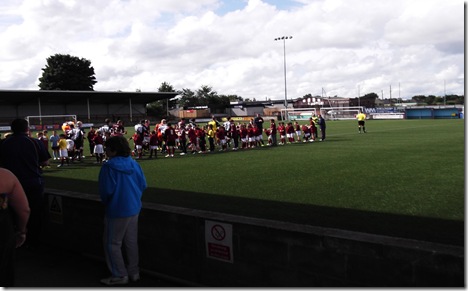 The game kicked off with John Gemmell leading the line for Stenhousemuir and my namesake Andrew Jackson up front for Brechin (Andrew Jackson is my Christian name and it is also my Father and my Son’s name). 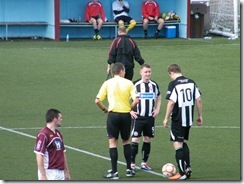 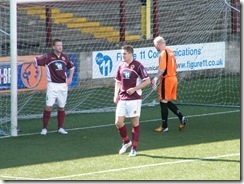 The Warriors took the lead on 21 Min’s when Gemmell headed home following a cross from the impressive left back Sean Dickson. There wasn’t much action till after half time when Brechin came out the stronger and there pressure paid off as on 57 min’s Andrew Jackson bagged a goal for Brechin after a cross from the left he smashed home through a crowed penalty area possibly taking a deflection of the defenders. A few min’s later both side's hit the woodwork first Stenny in the 63 Min after a header from Gemmell and then Brechin Substitute David McKenna Smashed a shot against the bar. In the 72 Min Stenhousemuir re-took the lead after a foul on the edge of the area Gemmell stepped up to smash home the free kick. In the 80 min Stenny had another free kick but this time Gemmell smashed just wide. Deep into injury time Stenhousemuir were awarded a free kick and again  Gemmell Duly smashed home for his Hat-trick. 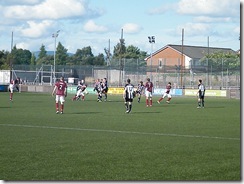 After the whistle we quickly made our way back to Larbert for the 1730 back to Queen street and then onto the 1840 back to Carlisle with the Drunken but happy Rangers fans. All in all good day out and another tick on my 42 grounds list now I have to decide whether to re-visit the ground with East Stirlingshire. 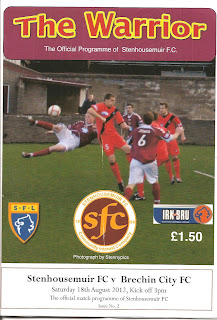