Curzon Ashton F.C. are a football club based in Ashton-under-Lyne, near Manchester. They currently play in the Northern Premier League Division One North and are members of the Manchester County Football Association . Nicknamed "The Blues", the club play their home games at the Tameside Stadium in Ashton-under-Lyne. Curzon Ashton was formed in 1963 after the merger of two clubs, Curzon Road F.C. and Ashton Amateurs F.C., who played in the Manchester Amateur Football League. The amalgamated club's name was originally Curzon Amateurs before being changed to the current name. Curzon moved to the £4 million Tameside Stadium at the beginning of the 2005–06 season. Outside the stadium, a statue stands commemorating three locally-born footballers associated with the World Cup; Geoff Hurst (born in Ashton), Jimmy Armfield (Denton), and Simone Perotta (also born in Ashton).
I set off from my usual finishing point at Birchwood and headed east bound along the M62 I decided to take the Clockwise route round the M60 and came off at Junction 23 following the Sat Nav. Unfortunately the roads around Ashton are being dug up and major alterations are taking place due to the tram network expansions. The section of the Richmond Street was closed just after Lord Sheldon Way so I had a diverson via Oldham Road and Knowle Avenue arriving at the ground for about 1935. Outside the ground is a statue to the Tameside world Cup Heroes 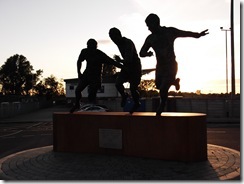 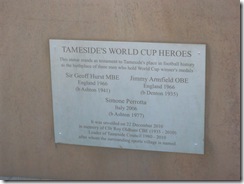 The Only former Carlisle Player in the side was Si Lakeland who wore the number 6 he was released by Carlisle after 1 year as a pro after being besieged by injuries. 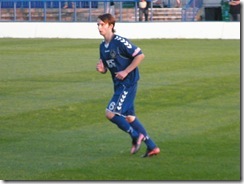 The game it self started slightly late I think as Garforth had arrived late and they also named only 2 subs on the Bench.  The first chance came after about 10 min’s when following a free kick Curzon’s Watson headed wide. On 14 min’s another free kick was awarded and Scott Metcalfe flicked the ball into the net (1-0). Curzon took full control after that Cook and Watson going close, Whilst Sherry had a chance for Garforth. Metcalfe then had a volley turned behind by the goalie. In the 32 minute a quick break from Curzon led to the second goal the impressive Metcalfe once again causing havoc on the left and his cross found evans at the far post but his shot was well saved but the rebound hit Kristian Dennis before trickling into the net (2-0). On 38 Mins it was (3-0) Metcalfe was again free down the left and his Brilliant cross was turned in by Kristian Dennis for his second. Soon after it was (4-0) when Dennis’s left foot smash shot into the goal. 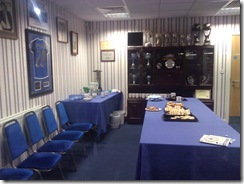 At half time I wondered round the ground getting some photos and having a look inside the stand and bar area with the 3g pitches out the back.
As the game restarted it was (5-0) a run by Bowyer found him in the middle and he tapped home, Shortly a few min’s later it was (6-0) another run from Metcalfe and another Excellent cross found Dennis again in the area and he could do little as the ball smashed in off him for his fifth and Curzon’s sixth. The 5 goal Striker was replaced shortly after and the game fizzled out with Garforth themselves having one or two chance’s. Curzon themselves having two chances through Robinson and Summerskill. 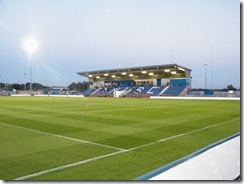 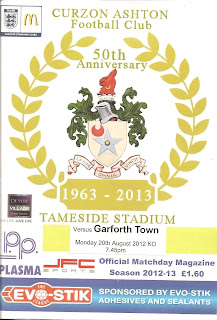 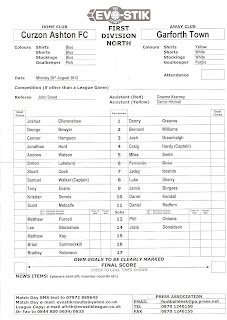