Trafford F.C. is an English football club based in Flixton, near Urmston in the Metropolitan Borough of Trafford, in Greater Manchester. The club are currently members of Division One North of the Northern Premier League and play at Shawe View. 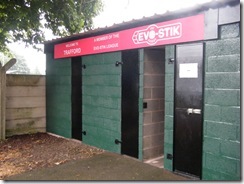 Once again I departed from Birchwood Warrington along the M62 onto the M60 before Leaving a junction 10 a few moments later I turned right just after the bird in hand pub and found a small car park. Altrincham took the lead after 15 minutes when Trafford’s young right back Ally Brown conceded a penalty that Alty’s leading goalscorer from last season, Damian Reeves, blasted past Tom Read. Reeves was just returning from a 2 week trial with Gillingham. Kamahl Whight twice fired over as Trafford came more into the game but in the 39th minute Simon Richman made it two when he outpaced the home defence and cooly clipped the ball home.Two minutes later left back Andy Smart reduced the arrears with a superbly flighted free kick just inside the far post from 30 yards. 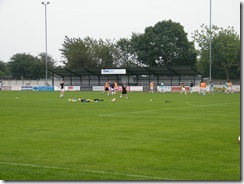 The opening minutes of the second period were closely fought with Trafford giving as good as they got but in the 61st minute James Lowery made it 3-1 with a tremendous drive from 25 yards that left keeper Sam Lynch with no chance.Lynch made several excellent saves as Alty pressed for a fourth but Trafford created a number of chances themselves with Melford Knight twice going close and Scott Barlow crashing in a drive that was brilliantly pushed behind. 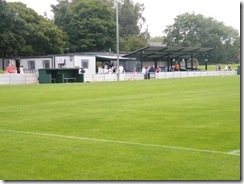 A good performance from Altrincham and Damien Reeves is defiantly a striker league clubs should be looking at but as to date nothing concrete had been done. 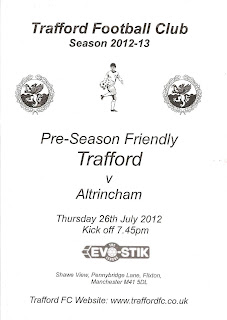