When United were founded in 1882, Skelmersdale was a small coal-mining town. Skelmersdale became a designated new town in 1961 and ushered in a whole new era for the area. Coincidentally, around the same time, in August 1961, Wesley Bridge was made Secretary/Manager of United and began the radical restructuring the club. They play at the West Lancashire College Stadium Located at Selby Place on the Skelmersdale, the football stadium caters for both college needs, as well as being the home for Skelmersdale United and Liverpool Ladies. The stadium has a capacity of 2,500 I made my way along the M62 from Birchwood and up the M6 to Skelmersdale it was easy to find. I parked up beside the ground on a road which was used for truck drivers as an overnight stop. After a bright start it was Skelmersdale who took the lead in the 12th minute. Kenny Strickland crossed the ball into the penalty area from the left, Rob McIntosh beat two defenders to head into the Southport net. The lead was to last only a few minutes as the Skelmersdale keeper was adjudged to have collect a back pass and from the resulting free kick Tony Gray smashed home the free kick. after 19 minutes Josh Hine was sent clear but the keeper saved well and 5 mins later Southport’s goal scorer was sent clear but a poor finish meant Skelmersdale where able to clear following a fine tackle from the defender. 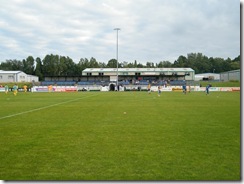 After the break Skelmersdales Hickey was unable to score after a cross from the left. On 61 Mins Skelersdale were awarded a free kick after a much debated handball Nemes then smashed the ball into the goal via the post to make it 2-1. Both teams made changes in the reaming time. The quality of the football did suffer, but most of the efforts coming from Skelmersdale. It was hard to tell who was who at that point as there was 2 number 10’s and 9’s on a one point for Skelmersdale. Skelmersdale were able to see out the match to claim a win against a side 3 divisions above. 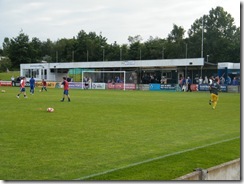 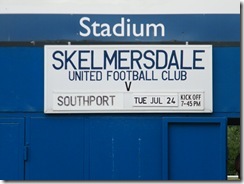 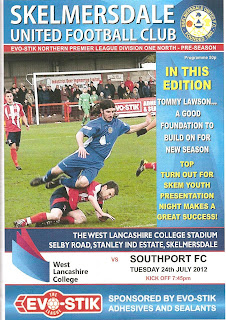