I originally went to Rotherham’s Don Valley on the 31st August for a JPT game V’s Lincoln and Also again on the 9th April as I was on my way to Shepshed for work and there was nothing else to do on way. It was Originally number 64.
Rotherham United announced their intention to construct a new community stadium when they moved away from Millmoor in May 2008 after a dispute with the ground owner Ken Booth. In January 2010 the club purchased the former site of the Guest and Chrimes Foundry to be used for the new stadium. Guest and Chrimes were a steelwork company, who made the iconic fire hydrants seen in New York City. Outline planning permission for the stadium was granted in November 2010, and the first images were sketched up shortly after. Construction started in June 2011 and the stadium was first opened on 21 July 2012, where Rotherham met Barnsley in a pre-season friendly. The stadium is located within walking distance of the railway station and bus interchange and is easily accessible by car. It is a few minutes walk away from Rotherham Town Centre, unlike most other grounds throughout the country. The name for the stadium was announced as the 'New York Stadium' on 19 December 2011, chosen ahead of 'The Foundry' and 'The Waterfront Stadium'. The reasoning for this is that the area of land that the stadium lies upon is called New York, and it was thought that it would be better to name the stadium after history and/or where the stadium is situated, like nearby stadiums Bramall Lane and Hillsborough. Chairman Tony Stewart also hopes that the name could bring investment from New York or further afield, as the New York Yankees chairman had recently said that he wanted to invest into an English football team. It has a Capacity of 12,021
We left Carlisle at 1030 is and we were in Rotherham by about 1.15 we Parked up at the Sight of the old Ground Millmoor and walked from there 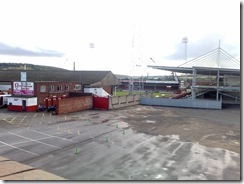 I already had my tickets for the Hearts end but my friend Adam had to pick his up at the reception I could see the queue’s for the Programmes but we decided to get Adam’s ticket first I then got in a queue for a Programme but he had sold out by time I got to the front. We were not able to get another anywhere else. Although we did get a team sheet which was 20p. I took my seat in the South stand Whilst Adam was in the Ben Bennett stand. 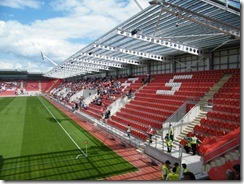 Hearts won the game with a single goal from former Carlisle Loanee John Sutton a cross from the right found him at the back post to tap in right in front of us. 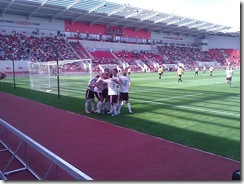 The ground is far better than I expected although most of the ground is still empty and bare. No club shop yet nor ticket office. Pie’s and Burgers the usual expensive type, which again sold out. Hearts played some entertaining football and Rotherham were poor for a promotion chasing side. 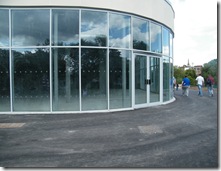 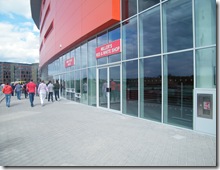 We took some photos of Millmoor before making the journey back up to Cumbria, and I wonder who cuts the grass at Millmoor most abandoned grounds the grass is out of control but someone still seams to take care of Millmoor ? 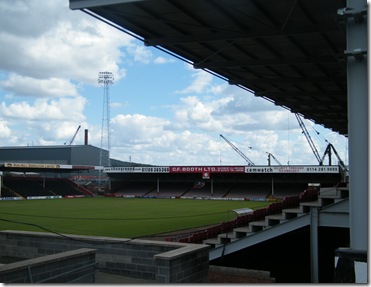 Programme £3(I think Sold out) 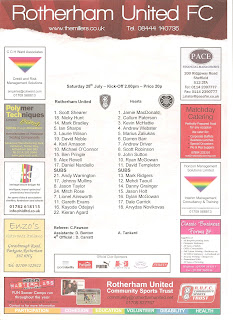