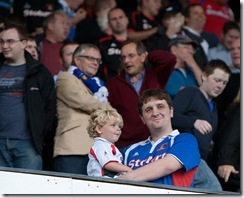 I plan to visit the remaining 18 Scottish teams as well as Rotherham’s new ground.

As well as that I plan to do the remaining 11 Blue Square Premier grounds I need 1 of which will be Barrow on the 21st July as Carlisle United Visit. For those of you interested I pass Holker Street every morning on my way into and out of Barrow delivering Mail for TNT and still ain’t been. There is 12 Left in the Blue Square North as things stand. I may not get these done all in the 2012-13 season but will give it a go much of this will depend on work and family issues