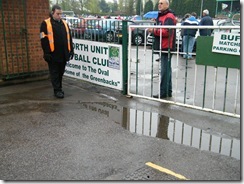 Bedworth United Football Club (nicknamed "the Greenbacks") is a football club based in Bedworth, Warwickshire, England, currently playing in the Southern League Premier Division. The club was first formed in 1895 but has been disbanded and re-formed on a number of occasions. The club plays its home matches at The Oval.

So its Bank holiday Monday and I am off to Shepshed for a Collection for my employers and bring it back to Carlisle. I set off rather late from Carlisle but still make it to Bedworth for 1500 and after parking the van at the Cricket club behind the ground I enter the Ground. 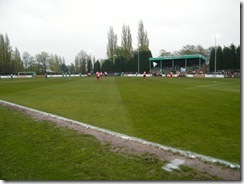 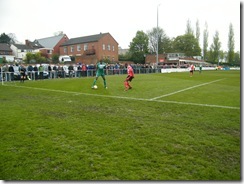 The second half stated and in the 58th Minute a flick forward found the Bedworth number 9 who was tackled by the centre half but the ball fell kindly to the Bedworth number 10 (Piggon) who’s shot took a deflection via a defender and into the net in the final minute the ball found its way forward to the Impressive number 8 Spencer who was 1 on 1 with the keeper, as the keeper came out he calmly lifted the ball over the keeper, who managed to get a hand on it but he was unable to keep it out, That capped an Impressive performance by the number 8 (IMO)  At that point Beaconsfield knew the game was up and heads dropped. at the full time whistle a customary pitch invasion started and Bedworth were promoted to the Evo-stik Southern Premier Division alongside local Rivals Leamington and Kettering. 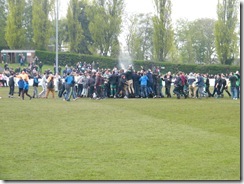 You can see the highlights of the game here :- YouTube footage