Stalybridge Celtic are an English full time professional football club from Stalybridge, Greater Manchester in North West England. The club, which plays its home matches at Bower Fold, is currently in the Conference North in the sixth tier of the English football league system In 1921 Stalybridge Celtic became a founder member of the Football League's Third Division (North). But after only two seasons in the new league, they became the first club to leave the new division. The club's formation is usually given as 1909. However, it may have been as early as 1906 when an amateur club with the same name was formed. The current main stand was built in 1996, with the covered stand at the Town End (The Joe Jackson Stand) dating from 1994. The main stand, replaced a wooden one dating from 1909, which held 500 fans, before being converted to tip-up seating with a reduced capacity of around 400 persons. The Lord Pendry Stand opened in 2004, replacing a covered terrace dating from the 1950s. The Mottram End cover stems from construction starting in the 1970s and finishing in the mid '80s. The main stand, holding about 700 people, is all seated. Its opposite stand, The Lord Pendry stand has 652 seats. The Club shop and bar are behind the Joe Jackson stand The ground's capacity of approximately 6,500 has not been reached recently. The attendance was nearly 4,000 when Chester visited.

Me and the boy departed Carlisle at 12 and after filling up, we travelled down the M6/M61/M60 before coming off at Junction 23 through Ashton under Lyne and Stalybridge itself. we parked up just by the entrance to the ground on the main road,as the main car park was full (Normally £1). Straight away 3/4 coaches of Halifax fans were beginning to arrive so we decided to head straight through the turnstiles into the ground. we headed to for social club directly behind the goals for a quick drink.

the game kicked off to a Minutes applause in memory of John Dillon a director of Stalybridge who had recently died.

The game kicked off and Stalybridge were first to attack after a initial spell of pressure the game became a bit scrappy. Chris Lynch gave the hosts the lead after 27 minutes when the defender tapped the ball into the net from six yards after an in-swinging free kick.But they weren’t in front for long when after 34 mins James Dean played a ball along the front of the box for the on-rushing Sean Clancy to tap in Clancy is the brother in law of Peter Crouch (Rumoured to be in the stands). The game didn’t amount to much up to half time. After the break both sides went close but neither could find the killer pass to create the chance for a goal. after 64 mins Halifax brought on the Lively Jason St Juste who was looking dangerous down the left hand side a good cross from the left was unable to find a Halifax man in the middle. On 80 Mins Greg Wilkinson sent a warning to Halifax when his 30 yard effort was just wide, But Halifax didn’t head the warning and minutes later his rasping shot this time beat the keeper into the back of the net to give the Host a 2-1 lead after 84 mins. Stalybridge managed to hold on to the lead for the final 6 mins plus injury time and the final whistle brought the game to an end with the home fans jubilant leap frogging the visitors into 4th with 4 games left to play. 1647 was the attendance, including over 800 Halifax supporters that made
the 30 mile trip from West Yorkshire boasted by the club laying on free coaches. 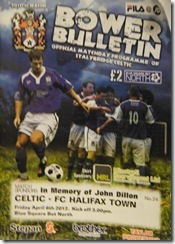 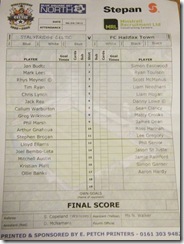