Droylsden were originally formed at the invitation of Joseph Cropper, the landlord of the Butchers Arms public house, to play behind the pub. After twenty years of friendlies and local leagues, disbandment, reformations and changes of strip, the club emerged from World War I the sole survivors amongst the village teams, and as members of the Manchester League.

The club also adopted their now traditional colours of red and white, the inspiration for the unusual nickname of The Bloods.

Butcher's Arms Ground is a multi-use stadium.The stadium has a capacity of 3,500 people both seated and standing and is nicknamed "The Slaughterhouse" or "Abattoir" by fans. The Butchers reference is celebrated at a designated home game once a year, when the stadium floor is sprinkled with saw dust and fans are invited to wear white overalls and hairnets. It has partial or full cover on three sides of the pitch, terracing on four sides and seating along the centre of one side, plus a public house.

The ground is named after the Butcher's Arms public house, whose landlord in 1892 instigated the formation of Droylsden FC to play on land behind the pub, which became the ground. After World War II the lease of the Butchers Arms was sold to Belle Vue FC, who renamed themselves Droylsden United. And that club took over playing at the ground, forcing Drolysden to move to the nearby Moorside Trotting Stadium. However, the town wasn't big enough for two clubs, especially with bad feeling between them, and after the local council bought the ground, a merger was negotiated and Drolysden returned to the Butcher's Arms ground in 1952, after it had been renovated and the pitch had been rotated to its present position, finally eradicating a long-standing drainage problem.

The record attendance is 4,250 for an FA Cup first round match between Droylsden and Grimsby Town in 1976.

As  Usual I got my delivery to Birchwood (Warrington) delivered on-time so I was straight back onto the M62 towards Manchester at the M60 Junction I took the southbound direction and followed the M60 all the way round to junction 23 then followed the A662 towards market street through all the new tram roadwork's and parked up behind the ground in the retail car park. The pricy some of 20p parted with for 2 hours parking. I walked round past the kings head pub and just after the car wash was the entrance to the ground.

This was great viewing for the neutral, with a goal from Dan Gardner that would have graced the highest level of the game.

The breakthrough arrived a minute before the break when a Droylsden counter attack resulted in Carlos Logan leaving two in his wake to set Dale Johnson free, who slotted past the exposed Bridsall.

Shortly into the second half was Gardner's moment of glory, collecting the ball 30 yards from goal before advancing a couple of paces and unleashing an unstoppable dipping volley for a goal that was worth the admission fee alone. On 71 minutes when Gardner again let fly, this time with his left foot, and Birdsall could only parry, with Buchanan fouling Johnson from behind as he went for the loose ball.  Gardner demanded the ball, and despatched the spot kick for what should have been part That Spartans had other ideas, though, and a combination of their spirit with Droylsden sitting deeper turned the match on its head.  Within a minute of the penalty, Armstrong bundled home from close range following confusion over a free kick to give the visitors hope, and two minutes later it was 3- 2 when Spartans man of the match Andy Ferrell stabbed the ball past St. Louis- Hamilton after chasing a long ball forwards. Spartans substitute Lee Mason drove forwards when the visitors won the ball in midfield and kept his composure to beat St. Louis Hamilton with a low drive to ensure the spoils were shared, which looked so unlikely 20 minutes earlier. 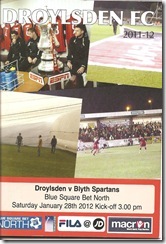 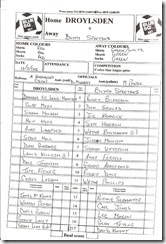